TV Patrol World tops TV ratings for news and public affairs programs in 2009, according to TNS 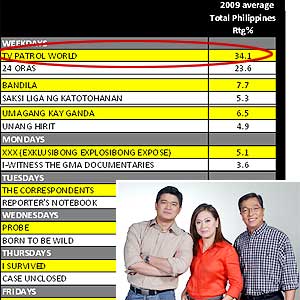 ABS-CBN's recent ratings report focused on the dominance of its news and current affairs programs in 2009.

In January 2010, the gap further increased to 12.9 percentage points, with household ratings of 35.5 percent versus competition's 22.6 percent.

When it comes early morning and late night news, TNS data showed that Filipinos prefer to tune in to ABS-CBN.

Bandila, the first Philippine news program nominated for an Emmy, beat Saksi's 5.3 percent with an average rating of 7.7 percent in the late night newscast category. Similarly, Umagang Kay Ganda reigned in the mornings with 6.5 percent; its competitor Unang Hirit got 4.9 percent.

ABS-CBN, according to the list, also dominated the current affairs late night timeslots.

In terms of special coverages and documentaries produced in 2009, the Kapamilya network also posted remarkable ratings over competition, with the world-class funeral coverage on late former President Cory Aquino Salamat President Cory: A People's Farewell grabbing the top spot with an average rating of 35.7 percent versus GMA-7's Salamat at Paalam Cory with only 23 percent.

Among the 20 top-rating news specials for 2009, 16 were produced and covered by ABS-CBN, including Matanglawin's special in calamity management "Delubyo," Salubong sa Bagong Simula: Countdown to 2010, Sagip Kapamilya: Bagyong Ondoy, and Kahapon, Ngayon, at Bukas: The Mar-Korina Wedding Special.

It will be recalled that ABS-CBN shifted to TNS after filing a case versus AGB Nielsen Media Research for failing to comply with its request to investigate alleged cheating and data tampering in TV ratings.

Last January 7, Quezon City Regional Trial Court (QCRTC) junked and deemed the complaint of ABS-CBN as "prematurely filed." But at press time, ABS-CBN stated that "the case is still pending in court."