"Buwan at Baril" runs at the Ateneo until September 1 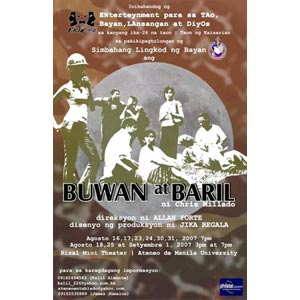 Chris Millado of Zsa Zsa Zaturnnah Ze Muzikal fame directs the period play Buwan at Baril (Moon and Gun)that is being staged at the Ateneo until September 1, 2007.

Ateneo-ENTABLADO (ENterteynment para sa TAo, Bayan, LAnsangan at DiyOs) opens its 26th Repertory Season with the staging of Chris Millado's Buwan at Baril (Moon and Gun). This CCP award-winning piece, which was first staged in 1985, is currently being shown at the Rizal Mini Theater until September 1.

As an answer to the nation's call for unity in diversity, Chris Millado's Buwan at Baril portrays the lives of Filipinos from different sectors of society during the time when President Ferdinand Marcos still ruled the country.

The play features the lives of eight Filipino citizens: the middle aged Manggagawa (laborer) and his Magsasaka (farmer) brother, both fighting for their rights at the Martsa ng Bayan (People's March); a Priest and a Babaeng Itawis (a member of the Ibanag tribe) brought together by fate, trying to escape their harsh past; an Asawa (wife), who has to pretend that she's a cousin of her husband so that she can claim his remains; a middle- class Socialite who is divided by her political beliefs and her social status; a former subversive who's now a part of the Police, and a Student Activist who tries to get his way out of the police station but is surprised to see that his interrogator was once his comrade.

Director Allan Forte, apprentice and assistant director of multi-awarded film director Marilou Diaz-Abaya, takes this EDSA People Power 1 masterpiece into the present. Studded with actors and actresses from ENTABLADO and the Ateneo community, Buwan at Baril promises its mature audience a different look on social involvement and awareness. Buwan at Baril will also bring its audience back to the Marcos era, as it showcases the arsenal of Philippine Protest Theater.