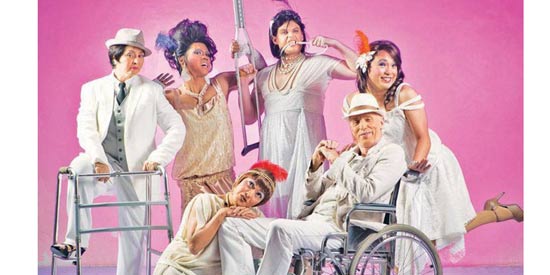 It took a long time until a good partnership like this come to fruition.

After 45 years, Repertory Philippines (Rep) and PETA, the top theater companies in the country, have partnered to produce the best in local theater.

In a presscon last April 13 in Makati, the people of Rep and PETA were present to explain the partnership. They denied that the partnership took a long time to form due to any perceived feud.

“This is the first time we actually brought PETA to our home,” added Lauchengco-Yulo, alluding to their first project together: a re-staging of Caredivas, PETA’s surprise smash hit from 2011.

Caredivas is a musical play about five transgender caregivers who transform into glamorous drag queen performers at night. It will be staged this coming April 27-29 at Onstage Greenbelt, Rep’s home.

Of all the plays PETA has produced, why did Rep choose Caredivas?

“I totally loved the message,” Lauchengco-Yulo answered, remembering the time she watched the play herself. “I never realized that they go through this. Ignorant, I guess. You hear about these caregivers abroad, but you never really think about what their life is like, or what they go through. So I left the theater totally moved.”

She continued, “It’s exactly what we want to do, educate people that, hey, there could be this life that you may not be aware of, that is happening… To make a story, I was totally blown away. Fantastic idea.”

Now that Caredivas is going to Rep’s home, should PETA’s fans fear that the play’s formula will be changed?

Maribel Legarda, director of Caredivas and PETA, gave a firm no.

“It’s the same play and we’re not changing it,” Legarda said. But she did not hesitate to share that there are challenges.

“It’s actually a challenge to us, because we did it last year in a very small intimate space. And the Rep stage is bigger than ours, almost twice, and also the size of the audience. But that is a challenge to our actors, how they can conquer the stage,” she said.

“Hopefully this will be the beginning of many many more projects to come. In fact, we were already talking about many more possible projects. So hopefully, something will come. And we are excited about this project,” he said.

CAREDIVAS. Caredivas is a comedic look at the lengths transgender OFWs go through while working abroad. At the heart of the story are five friends: the kind and loving Chelsea, the sarcastic group leader Shai, the ditsy Thalia, the bubbly Kayla and the ill-tempered Jonee.

Working in Israel and away from their families, the five sideline as glamorous drag queen performers at night to find fulfillment in their lives.