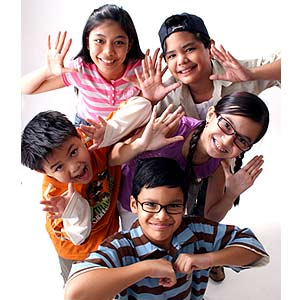 Children's Letters to God stars (clockwise from top left) Micah de la Cruz as Joanna, Marek Sison as Brett, Aria Clemente as Iris, Jaime Calabig as Theo, and Ruiz Sison as Kicker. This musical play will run from August 31 to September 2 at the RCBC Plaza.

If you could ask God a question what would it be?

"Dear God. Are you really invisible or is that just a trick?"

"Dear God. How come you did all the miracles in the old days and you don't do any now?"

These are just two of the hard-hitting questions and tell-it-like-it-is revelations that make up Children's Letters to God, the new musical inspired by the international best-selling book of the same title.

The off-Broadway musical Children's Letters to God will be staged at the Carlos P. Romulo Auditorium, RCBC Plaza, Makati City, on Aug. 31, Sept. 1 and 2. Presented by Actor's Actors Inc. (AAI) and Great.Events@Manila Inc., thishighly innovative musical contains sixteen tuneful songs and assorted scenes (some based on actual letters) that explore timeless issues such as sibling rivalry, divorce, holidays, the loss of a beloved pet, the trials of being unathletic, and first love.

Five young friends (Joanna, Iris, Brett, Theo, and Kicker) voice out their beliefs, desires, questions and doubts common to all people but most disarmingly expressed by children. This entertaining show carries a universal message, which crosses the boundaries of age, geography, and religion. Expressed in letters recited by five talented young actors (ranging from 9 - 14 years old) that are both amusing and heartfelt, they ask questions like "God, how did you know you were God?" and "God, why do my feet stink?"

According to the musical play's director, Bart Guingona, questioning one's faith is the hallmark of a well-grounded belief system. "Your faith is never complete until you question it and be able to answer it yourself," he explains. "Questioning God in an innocent and pure way strengthens you as a person. In the end, when you are able to answer the questions, it makes you a better person."

This family-friendly, feel-good show is a reflection of all the questions that kids have for the Big Guy. It will make you remember yourself as an inquisitive kid while perhaps bringing a tear to your eye and definitely a smile to your face.

The show has been translated into several languages and has had performances around the world from Tel Aviv to Seoul to Singapore, Johannesburg, Madrid, and Mexico City. The upcoming performances in Makati City mark the Philippine premiere of this inspiring production. The director has also expressed his desire to make a Tagalog version of this kid-friendly musical.

Children's Letters to God goes onstage on a limited run from August 31 to September 2 at the RCBC Plaza's Carlos P. Romulo Auditorium. For ticket inquiries, please call Ticketworld at 891-9999.