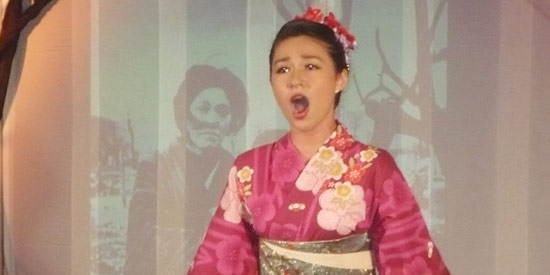 Giacomo Puccini's Madame Butterfly is both a celebration of life as it is of music.

"Music is a gift from God, in that long after our breath has gone, we'd still hear it," says Dr. Anton Juan, multi-awarded international director for theater.

"That's what happens to music. Long after you've lived your life in the theater for the night, and you leave the doorsteps, the music stays.

As director in the restaging of Puccini's most famous opera, Anton Juan gives Madame Butterfly—which he says "is very familiar to all of us"—a new take.

In no way would lovers of theater and the music arts better appreciate the opera than having a story that's close to home, he believes.

"I lived with it as a young child, going with my mother through Intramuros.

"Because my mother was a social worker going through Tondo, I would go with her sometimes.

"And there was a familiar phrase that I would always hear... ‘hanggang pier lang’.

"We know that, don't we? It's like, 'this woman was left by an American G.I., right? It happens in Clark [Air Base, Pampanga], and in Cafe Havana, in Makati.

"Madame Butterfly is not syncretic. Meaning, it's not only within itself, at the moment.

"It's not a formalistic opera that makes it great; (rather) it is diachronic, which means that it speaks of time and a story that has existed fromMedea who's left by Jason (in the Greek play by Euripides, Medea), to the moment in Cafe Havana where a woman aspires to marry a foreigner, (or) has a child by a foreigner, but was left behind."

"I thought that I was offered to do Madame Butterfly and probably things come to our lives at the proper time," director Juan said.

"I believed that things have crystalized to this moment for me to speak again about another woman that we can relate to in our society.

"There will always be the story of pure love that hopes to be caressed and cradled. But, suddenly, that cradle melts and breaks apart.

"And what is left is not only a woman, but also the child.

"What is left is not only a pure culture, but also a culture that is colonized, dominated and shattered to pieces.

"These are the conflicts in Madame Butterfly that we see in our society. And we've seen it in many other societies all over the world."

FILIPINO AND FOREIGN ARTISTS. Last seen as a full production in 1994, Madame Butterfly is one of the most-performed operas worldwide, imbued with the sublime music of Puccini.

For its rare performances on June 22 and 23 at Tanghalang Nicanor Abelardo (Main Theater), Cultural Center of the Philippines (CCP), Madame Butterfly will fuse both traditional and contemporary theater.

Commissioned to execute the set and design the costumes is talented young designer Leroy New; to create the lighting design is John Batalla, a "renowned lighting magician" of modern local theater; and emergent artist Pat Valera serving as video designer and dramaturg.

LOVE, WAR, RESURRECTION. As to the opera's basic narrative content, Dr. Anton Juan gave a glimpse of what to expect; a peek into the tapestry that constitutes the universe in Giaccomo Puccini's masterpiece.

"My take would be Madame Butterfly in time of war," he said.

"But I don't want to give very much; (except for) the rupture that happens to the world at that particular time, caused by war in a century that never had more wars than in any other centuries [as previously documented]."

As it celebrates the beauty and power of music, being a so-called 'panacea' to a man's sorrow, Madame Butterfly speaks to every woman's heart that has been likened to many shattered, fragmented cultures.

"But it doesn't end that way. It ends with music rising above its inadequacies, as pain rises over its own catastrophe.

"And as beauty realizes that pain, our sense of beauty shapes into a melody; and music that will make us remember that pain; and resurrect from it, as well.

"That's why it's called 'butterfly', [emerging] from a cocoon to a beautiful creature with wings...

"I hope this opera will take you all on its wings," says Dr. Anton Juan at interview’s end.