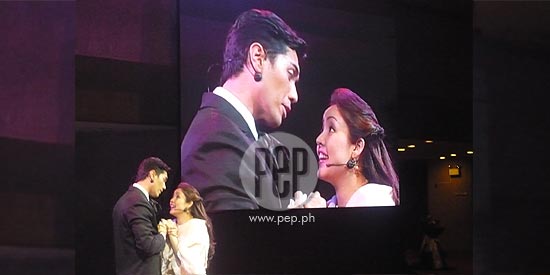 It was PETA's and Ballet Philippines' night at the 4th PHILSTAGE Gawad Buhay Awards held last July 1 at the Main Theater Lobby of theCulturalCenterof the Philippines (CCP).

William, a reworking of British author William Shakespeare's classic masterpieces, was created for easy understanding and appreciation by Filipino students. It won as Outstanding Play Production and Stage Direction for Maribel Legarda.

Care Divas, a musical about the lonely lives of migrant workers based inIsrael, won the Outstanding Ensemble Performance in a Musical and Outstanding Musical Productions, among other awards.

Meanwhile, Ballet Philippines, a dance theater company based at the CCP, scored a sweep of 9 awards in various categories. This includes Outstanding Modern Dance Production for its dance-fantasy tale Encantada and OutstandingSetDesign for the late National Artist Salvador Bernal.

Sleeping Beauty, another production of BalletPhilippines, won two other awards for Outstanding Featured Performances in a Classical Dance, given to Jean-Marc Cordero (Male) and Rita Winder (Female).

Next big winners are productions from Tanghalang Pilipino: four awards for the musical adaptation of Noli Me Tangere, with two lone winners: National Artist for Literature Bienvenido Lumbera, who won for his original libretto; and Cris Villonco, Outstanding Female Lead Performance in a Musical.

Not to be outdone, the four-decade old Repertory Philippines won awards for its various productions in 2011: The Joy Luck Club, Outstanding Stage Direction for Dr. Anton Juan (co-winner with Maribel Legarda's William), and Peter Pan, Outstanding Male Featured Performance in a Musical Play, for Michael Williams.


HIGHLIGHTS AND SIDELIGHTS. The awards presentation, which started promptly at 7 PM stretched up to midnight (and beyond, including post-awards celebration) on the following day, July 2.

There were many categories, grouped into various sections for Dance, Play and Musical; and awards for writing, choreography, direction and performances.

Midway through the event, Theater Actors Guild (TAG) president Kalila Aguilos was called to announce some of the winners in a set-category and she called in her "surprise" co-host/presenter, Mr. Rafa Santos.

Rafa, it would be recalled, figured in a controversy last year when he made a statement (about the "skyflakes-cat food" issue) that was deemed derogatory and offensive against theater people. But all was forgiven--and forgotten, hopefully--after the neophyte filmmaker issued apology statements to everyone concerned.


At the Gawad Buhay! rites, Rafa delivered his opening spiel, thus: "I am supposed to ad-lib and crack jokes. But, you know, cracking jokes is not among my strengths."

Kalila commended Rafa for "being so sport" and presented her with a canister of Skyflakes crackers "as peace offering."

Started in 1997, PHILSTAGE is headed by its President Fernando “Nanding” Josef of Tanghalang Pilipino with Elmar Beltran Ingles as executive director and jury head.

Here's the complete list of winners of the 2011 Philstage Gawad Buhay! Awards for the Performing Arts:

FEMALE LEAD PERFORMANCE IN A MUSICAL
• Cris Villonco, Noli Me Tangere, The Musical