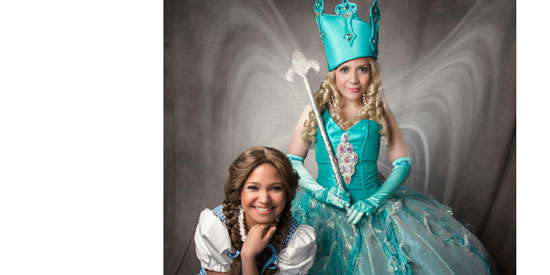 Sharing the stories of our childhood to today's youth is an admirable endeavor. Many of these stories, after all, are about magic and fantasy and open the imagination.

Such is the magic of L. Frank Baum's The Wizard of Oz.

Over the years, we have seen this classic tale adapted into movies, books, and musicals. Though their forms vary, they all contain the sense of wonder that the book originally offered.

This can also be said of The Wizard of Oz, Repertory Philippines Children's Theater's (RCT) latest offering for 2012. It is the local production of a foreign musical of the same title, with music by Jim Eiler and Jeanne Bargy.

The local production is directed by Joy Virata, the theater veteran who envisioned the RCT 20 years ago.

There is no shortage of magic in RCT's staging of The Wizard of Oz. Children will be delighted by the strange and colorful backdrops while adults will appreciate the singing prowess of the talented cast.

In one early production number, several Munchkins dance on stage wearing colorful costumes, making them look like moving candy. It is a delight to see.

Bringing Dorothy to life is Cara Barredo, a theater actress who has been performing onstage for years. Despite her age, she manages to convince audiences that she's a little kid, valiantly keeping a naïve exterior.

Dorothy's opponent, the Wicked Witch of the West, is singer-actress Pinky Marquez. She may be evil in the musical, but Pinky plays her character with such mirth that young viewers will not be too scared of her. Which, when you think about it, is just the right tone for a children's tale with adult messages.

On Dorothy's side is Glinda, the Good Witch of the South, played by Liesl Batucan. The multi-awarded stage actress performs as well as expected, if not more, and her voice is one of the musical's highlights.

Other beloved characters are brought to life by an exceptional group of actors. In the show that PEP caught, Hans Eckstein played Tin Man, James Stacey played Scarecrow, and Oliver Usison played the Lion.

All in all, RCT's The Wizard of Oz is the perfect vehicle to open children's eyes to theater, and to L. Frank Baum's timeless phantasmagorical story.