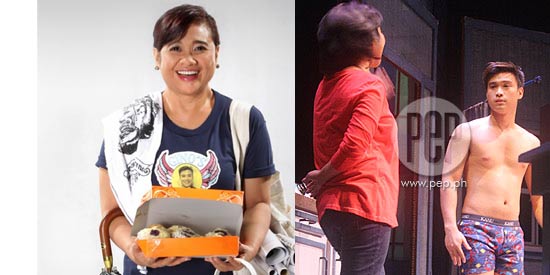 Years from now, the play Bona will be remembered as a landmark in Philippine theater for bringing Philippine cinema to the stage.

Bona is an excellent reimagining of the classic 1981 film that was an official entry in the Cannes Film Festival. It was helmed by National Artist for Film and one of the founding members of the Philippine Educational Theater Association, Lino Brocka.


After the successful adaptation of this film, it should inspire other theater companies to stage Filipino movies in the near future.

This is a good aspiration. After all, there already has been many stage productions of foreign movies in our theaters. Now is the time to explore our rich cinema heritage.

In PETA's modern day version of Bona, premiere comedienne Eugene Domingo replaces Nora Aunor in the title role of a fan who idolizes a male celebrity. Instead of Phillip Salvador, we get indie actor Edgar Allan Guzman as the object of Bona's obsession.

The cast is not the only upgrade. In fact, the whole story gets an overhaul. This is only fitting because all these changes make the play more relevant to our times.

In the 1981 movie, Phillip Salvador is a third-rate actor.


In this play, Edgar Allan is a reality show kick-out named Gino Sanchez. Bona, a call center agent, uses the Internet to earn income and to communicate with her idol. She also uses the Internet to rave about Gino in social networking sites like Facebook and Twitter. She also has a habit of defending her idol in the entertainment website PEP.ph (Philippine Entertainment Portal).

This timely update increases the play's power. It's a little terrifying that a story of unflinching idolatry in the '80s applies even up to now, in a world where communication is much faster, celebrities have a shorter shelf-life, and gossip is much more vicious.

Lead stars Eugene Domingo and Edgar Allan Guzman deserve praise for the energy that they bring onstage. Eugene is magnificent as Bona. Her dead-on portrayal of a street-smart woman who gradually loses good judgment is believable, allowing her to capture the sympathy of theatergoers. Her comic touch is still very much apparent as she delivers one-liners that elicit cheers from the appreciative crowd.

Edgar Allan is just as effective. His portrayal of an ambitious-but-lazy actor wannabe is so believable that you can't help but get annoyed whenever he's on stage. Edgar Allan also has oodles of charm and magnetism, so that you are convinced that someone can be crazy for him. It doesn't hurt that he has apparently worked hard at developing a leaner body that looks good in boxer shorts.

The other members of the cast are also commendable, particularly Joey Paras as Bona's gay best friend, and BJ Forbes as Bona's nephew. Joey holds his own in scenes where he needles Eugene, and that is something not every actor can achieve. BJ Forbes, meanwhile, makes you forget that he was ever in Eat Bulaga! as its youngest male host.

Other factors are also first-rate. The props up the realism of the set—running water, bathtub, and stoves included. The theater sound is crisp, and the use of an overhead screen is a good idea to speed things along.


One downside is the blocking used during a crucial moment in the play. At the height of the confrontation scene between the reality star and his number one fan, the lead actress has her back turned to the audience. As Edgar Allan tries to appease his loyal fan, the audience cannot see Eugene's facial reactions as she deals with her anger.
If director Soxy Topacio merely wanted Edgar Allan to have his "moment" onstage, he could have done that by continuing to train the spotlight on the actor as he lay screaming on the floor. But he could also have given Eugene, the major actor in this play and the title roler, her "moment" by training the spotlight on her before or after (whichever one Soxy deemed more dramatic) Edgar's screams.
Performances are scheduled every Friday at 8 p.m. as well as Saturdays and Sundays at 3 p.m. and 8 p.m.