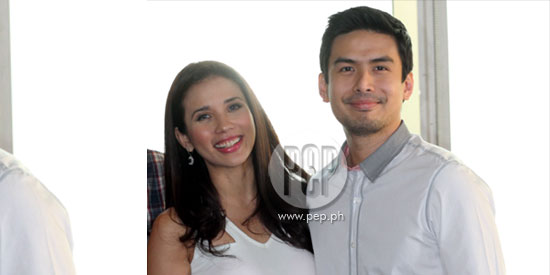 “We support each other in everything that we do and for another show like this, for me, ang sarap na katrabaho si K, especially on the stage. There’s no other place where we’re more comfortable,” says balladeer Christian Bautista. He and his co-STAGES talent, Karylle, have worked with each other in notable projects such as West Side Story (2008), and most recently, the Singaporean TV series, The Kitchen Musical

Christian Bautista and Karylle’s team-up have been tested through stage and television productions, weekly ASAP song numbers, corporate gigs, as well as major concerts held in and out of the country.

The STAGES talents’s tandem was remarkable in the 2008 local Broadway production of West Side Story and the 2011 Singaporean smash hit musical-drama TV series, The Kitchen Musical.

This year, Christian and Karylle are delighted to take on the lead roles of Rama and Sita in the restaging of Rama Hari, the musical-ballet adaptation of the Indian epic, Ramayana.

First staged in 1980 at the Cultural Center of the Philippines, Rama Hari proves to be a significant production in history as it is a collaborative piece by acclaimed Filipino artists.

Christian and Karylle will be reprising the characters that OPM greats Basil Valdez and Kuh Ledesma once played.

At the press preview held yesterday, October 17, at the 9501 restaurant, ABS-CBN Network, Christian and Karylle said that they are looking beyond the pressure of having big shoes to fill.

The actress, who previously starred in the musicals The Little Mermaid and Seussical, describes the restaging of Rama Hari as “revolutionary.”

“Kasi during the ‘80s… people were just so creative, they were exaggeratedly creative!

“As big as their hair was, as big as their shoulder pads were, that’s how gutsy and dangerous they felt when it came to creativity.

“That’s why I think they were able to come up with this. For me it’s just a tribute to make sure that this [production] is staged every decade, all the time.”

Rama Hari exhibits the genius of Ballet Philippines founder, Alice Reyes, who is director and choreographer of the play. Moreover, it is noted for the beautifully written Tagalog lyrics of the songs “Iisa ang Tibok,” “Awit ng Pagsinta,” “Tagistis ng Ulan,” and “Magbalik Ka Mahal.”

Karylle stated, "Kasi people have to know that the Filipino language is beautiful.”

Encouraging Filipinos to see the show, she added, “They have to know that this was created in the ‘80s when yun nga, even the dancing was, sabi nila, yung mga pairings, or yung mga steps hindi nila naisip na maggagawa na back then.

“So they have to know, people have to know that Filipinos are actually ahead of their time.”

Christian, on the one hand, compared the Rama Hari restaging to Chris Martinez’s I Doo Bidoo Bidoo. The latter, a silver screen musical released earlier this year, revived the classic hits of the APO Hiking Society.

The Asiansation balladeer echoed Ballet Philippines president Margie Moran-Floirendo’s statement that this generation is particularly fortunate to have this musical revived.

TRIED AND TESTED TANDEM. Christian and Karylle’s tandem was previously featured in the West Side Story play three years ago.

They both agreed that their partnership go way back.

Christian told the press, “K and I have done so many things together… Yes [our tandem] is tested.

“We know each other, we support each other in everything that we do, and for another show like this, for me, ang sarap na katrabaho si K, especially on the stage.

“There’s no other place where we’re more comfortable.”

Karylle responded, “Christian and I have worked together for so long…. Back when he was skinny, his suits were too big and hindi pa siya ganun ka-macho.

At the sudden remark that they almost ended up as real life boyfriend-girlfriend, Karylle let out a laugh.

She said, “Ewan ko. We’ve just gone through so much together and it’s always nice to be on stage together and for such an epic story.

Does it feel awkward whenever they recall almost becoming a couple?

Christian, who will turn 31 tomorrow, October 19, remarked, “Well, so much has happened already.

“Ang pinaka-importante lang ay whatever happened in the past, ang importante is now and what you do after your friendship, your bond— ”

Both agreed that the bond that never really goes away.

BACKING LOCAL PRODUCTIONS. During the press preview, Christian, Karylle, and the rest of the cast members encouraged Filipinos to support the local productions. This year, foreign musicals such as Mamma Mia and The Phantom of the Opera experienced a successful run thanks to Filipinos who flocked to the CCP where the said Broadway shows were staged.

Asked if they think the foreign acts should be limited in the country, Karylle replied, “I don’t believe in limiting. I believe in balance.

“So hopefully, for me, the producers of the foreign acts or productions will also produce local.

“They’re earning naman so much, baka they can also shell out money for the local productions because we do want to make sure that the creativity in the Philippines is always thriving.”

Over the years, the Filipino balladeer has established a fan base in South East Asian countries such as Singapore, Malaysia, Thailand, and Indonesia.

“So, everybody is welcome pero I encourage producers to support big productions like this.

Christian is fresh off the successful run of his five-night 10th anniversary concert. X Class was held at the Meralco Theater last October 6, 7, 12, 13, and 14. (CLICK HERE to read related article)

Meanwhile, Karylle guest-starred in the Singaporean action-drama Point of Entry, which is slated to come out on November 3 this year. The actress shot a few episodes in Singapore and in Manila for the said show.