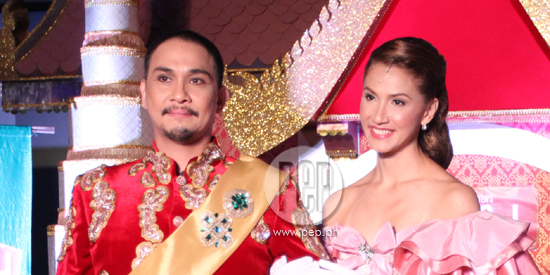 The King and I is extended until May 2013 at Resorts World Manila. Starting January 2013, Menchu Lauchengco-Yulo (right) will replace Monique Wilson as Anna Leonowens. Meanwhile, Nonie Buencamino (left) will replace Leo Valdez as King Mongkut.

Resorts World Manila’s The King and I is extended until May 2013. This musical was supposed to end this December 2012.

Resorts World Manila's Vice President for Entertainment Colin Kerr pointed out that the awards and positive reviews from theatergoers prompted management to extend the show.

During a press con held last December 7 at the Newport Performing Arts Theater, Pasay City, Mr. Kerr told the press: "When we won all the awards, it was only justifiable that we extended the show. So, the senior management of RWM [Resorts World Manila] decided to extend the show until May 2013."


However, Monique Wilson and Leo Valdez won’t be able to continue portraying their roles as Anna Leonowens and the King Mongkut, respectively. The two will have their final performance by December 30.

Menchu Lauchenco-Yulo will replace Monique Wilson for the lead role of Anna Leonowens, the English schoolteacher tasked to educate the children of the King of Siam.


Bo Cerrudo and Sheila Valderrama will also be alternating with them for the lead roles.

PREPARATIONS. Theater veterans Menchu Lauchengco-Yulo and Nonie Buencamino only have a month to prepare for their roles.

Nonie admitted, “We have a rather short preparation so we really have to focus. So when we open in January, we’re already polished.

Menchu added: "It has a lot of lines, ang dami—ang daming lines so we step forward rather than relax lang in less than a month tapos in a massive show.”

The two have previously worked with each other during productions for Repertory Philippines.

Menchu also recalled, “I had done this role for like ten years ago for Repertory [Philippines].

“I did Tuptim but I also did Anna--I was the understudy for that character.

“The difference is really katapat mo yung ibang tao, a lot depends on what Nonie’s gonna give me and the chemistry we’re going to build so we don’t want to copy.”

ON MONIQUE WILSON’S REVELATION. Last week, Monique Wilson made a huge revelation about her sexuality but Menchu assured that she was not replaced because she admitted that she was a gay woman.

“No, no...Monique [Wilson], I have known since we have all worked in the theater, kasabayan ni Monique is Lea [Salonga] when they did Annie.

“I had nothing to do [with her being replaced]. She was really ending in December because she has commitments in January,” explained Menchu.

The new Anna also admitted that she knew about Monique's sexuality even before her colleague made this revelation to the public.


“I knew that about Monique a long time ago so, I’m very proud that she was brave enough to come out because she symbolize a lot of kids suffering from that issue and a lot of people—somebody as established as Monique to actually come out and not fear any repercussion so very, very admirable,” said Menchu.

Now that he’s going to replace Leo Valdez, who won an award for the same role, did he feel any pressure to fill in those shoes?