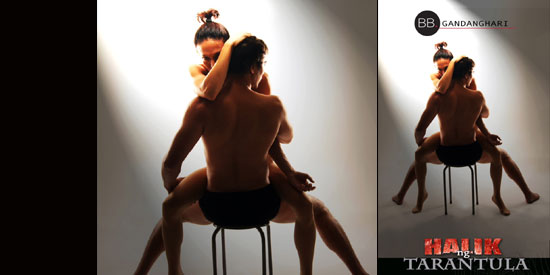 BB Gandanghari will star in the role of Molina in the brand-new stage production of Halik ng Tarantula this coming March 2013.

A translation by noted Filipino playwright Rene Villanueva of the highly-acclaimed Kiss of the Spider Woman, the stage play invites us to share the cell with two inmates of a Buenos Aires prison during the 1970s: One is a political prisoner, and the other is imprisoned because of his homosexuality.

BB Gandanghari, who is in the U.S, has finally accepted the role of Molina in the demanding theatrical opus written originally by Mario Puig.

Soxie Topacio will once again take the challenge of directing this play.

This will be his second time to direct Halik Ng Tarantula. The play was first staged in 1989 by PETA with Mario O’Hara as Molina and Julio Diaz as Valentin.

Auditions for the role of Valentin will be held from December 17 to 19, from 1 to 5 p.m., at Amerasian Recording Studio, #61 Scout Madrinian St., South Triangle, Diliman, Quezon City.

The setting for the Kiss of The Spider Woman is a wretched Argentine prison, where cruelty is routine.

The story focuses on the two cellmates: Valentin Arregui, a leftist revolutionary imprisoned for trying to overthrow the government, and Luis Molina, a homosexual imprisoned for allegedly corrupting a minor.

Misery loves company and the two ended up as close friends. Soon, friendship develops into something more and Molina falls in love with Valentin.

When Molina gained his freedom, he agrees to contact Valentin’s comrade, but he was followed by the police and was brought back to prison where he was threatened in front of Valentin to make the political prisoner talk. Molina convinces Valentin not to say a word.

As the play is driven chiefly by Molina’s storytelling, the role is undoubtedly paramount to the play.

The role is truly one of the most challenging and compelling in theater history, and BB Gandanghari’s acceptance of this challenge heralds her entrance to the world of theater.

This is not the only adaptation of the highly-acclaimed novel.

In 1983, Kiss of The Spider Woman was adapted into a play by the author himself and was first staged in London in 1985 in the Bush Theater, in an English language version by translator Allan Baker, starring Mark Rylance and Simon Callow.

It was later revived in April 27 at Donmar Warehouse with Rupert Evans as Valentin and Will Keen as Molina.

A film adaptation of Kiss of The Spider Woman was released starring William Hurt, who won the Academy Award for Best Actor for his portrayal of Molina, Raul Julia, and Sonia Braga. It was adapted from the novel by Leonard Schrader and was directed by Hector Babenco.

The upcoming production of Halik ng Tarantula will have a press launch on January 15, and is set to open on March 6, 2013 at Teatrino at the Promenade Arcade in Greenhills.