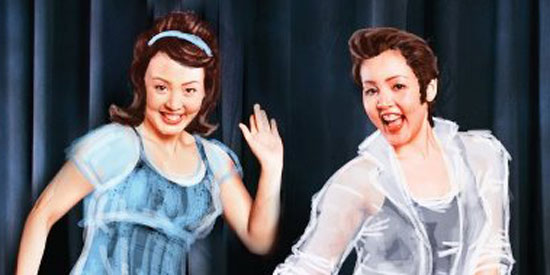 For an interesting take on William Shakespeare's Twelfth Night, schedule a visit to Philippine Educational Theater Association (PETA) and catch D' Wonder Twins of Boac. This comedy play will be staged until March 3 at the PETA Theater Center in Quezon City.


Written by playwright Rody Vera, this new play revisits the plot of an old theater favorite and breathes new local and cultural life into it.


The key characters from the original play are all present and deliver excellent over-the-top performances. However, the setting is placed in 1960's Philippines, Manila and Boac, Marinduque. Another modification is that the play is set in an era when two big film studios experienced their subsequent decline.


Director Maribel Legarda decided to stage D' Wonder Twins of Boac in a round arena and thereby provides the audience with a whole new and intimate take on theater. The stage consisted of four round circles set in the middle of the theater and this allowed theater goers to feel as they were part of all the goings on happening on stage. It is the second time in PETA's history that the company decided to do theater in the round, making it a fitting choice to close their 45th theater season.


D' Wonder Twins of Boac follows the story of twins Viola and Bastian from Boac, Marinduque. They've hit the local circuit of fiestas, singing and talent contests, and other competitions and are hoping to make it big. Following the still-popular trend of going to Manila in order to make a name for themselves, the twins get separated from each other when their ship gets shipwrecked in a storm. Mind you, all this is happening within the first two minutes of the play and it is quite dramatic. And the twins end up thinking the other is dead, too.


Here is where the plot of Twelfth Night is interwoven beautifully into the whole play--with the mistaken identities, complicated love attractions, scheming and plotting for financial gains--through fantastic song numbers and intense acting by all the cast.


Viola, played by Cris Villonco, becomes Cesar in order to 1) avoid a life of continued begging on the streets and 2) because film studio Campanilla Pictures was looking for its next big star to the tune of Elvis--a singing, dancing, acting male all-in-one sensation. But instead of becoming the big star she/he hoped to be, Cesar ends up becoming the boy-Friday of Campanilla Pictures owner Doc Orsino Villar, played by Lex Marcos. But because Cesar also proves to be a looker, Doc Orsino employs Cesar to seduce rival BLV Studios owner Donya Olivia Nepomuceno, (cted brilliantly by Shamaine Buencamino) into a partnership with Campanilla.


Cesar agrees because Doc Orsino promised Cesar would be made a star and because slowly, Cesar is developing feelings of complicated love towards Doc Orsino. Cris plays her dual roles really well and is quite believable as male Cesar, with hints of feminity, ala Gwyneth Paltrow's take in Shakespeare in Love. The whole thing is made more hilarious, because even as Cesar was sent as a means of seducing Donya Olivia into a dual partnership with Campanilla (Doc wants the studios to merge and for him to marry Olivia), Donya Olivia falls in love with Cesar.


This unintended love triangle proves to be a strong asset to the entire musical play as it provided the most laughs and drama. Shamaine is hilarious as she tries to seduce Cesar, who being egged on by Doc Orsino because of the deal she made, tries his/her best to avoid the advances.


Lex Marcos, who plays Doc Orsino started with the intention of bringing the two studios together, but ends up inexplicably falling for Cesar as well. Lex proves to be an excellent choice for the strong-willed Doc Orsino role and it is quite interesting to see his transition from treating Cesar merely as his boy-Friday to when he falls in love with Cesar and starts to do counter-strategies in keeping Cesar away from the clutches of Donya Olivia.


Cris Villonco delivers the innocence and naivete needed as Viola and awkwardness and sweetness along with struggling with duplicity and deception as Cesar. Her involvement with Donya Olivia's strong character versus Cesar's more toned down nature is so pleasing to watch and be engaged in. Her chemistry with Doc Orsino is so weird and interesting to witness, even as her character struggles to keep it all cool and macho. You will find yourself gasping for air because of too much laughing or holding your breath for fear of discovery whenever these three are on stage.


Shamaine Buencamino plays Donya Olivia as if the role were written for her. She is eccentric when she first appears as the grieving sole living owner of BLV Studios, after the death of her beloved brother. She becomes all cougar-like when she becomes attracted to Cesar and does everything in her power to make Cesar hers. Shamaine adds so much depth and richness to her character and her interactions with the other cast that it is hard to imagine D' Wonder Twins of Boac without her in it.


Chrome Cosio plays Viola's twin Bastian and becomes a wannabe stuntman looking for a job in Manila. He ends up befriending Antonio (played by Riki Benedicto) who has lusty intentions towards Bastian, which the latter tries to circumvent at all costs. This plot line references the homosexual undertones of Twelfth Night again. Chrome's Bastian is strong and driven and when he gets mistaken for Cesar, dives headlong into it, with hints of incredulity at being pursued by such a beautiful woman as Donya Olivia.


Lao Rodriguez as Malvolio is a high-brow person who personifies "I'm-a-better-filmmaker-than-you" to the tee. He is unwittingly involved in a subplot of intrigue orchestrated by Toma, Donya Olivia's drunken uncle and acted by Gie Onida along with Maria, Donya Olivia's househelp and acted by Kiki Baento. Through a series of calculated conversations and forged letters, they convince Malvolio that Donya Olivia has fallen for him in an attempt to bring the mighty filmmaker down. He ends up making a complete fool of himself and all these antics provide the play with huge bursts of laughter. Lao Rodriguez will have people hating Malvolio and loving how he plays Malvolio's egoistic snobbish character.


The complete opposite of Malvolio would have to be Luciano, played to the hilt by Phillip Lazaro. Luciano is swimming in two lakes because he is both Donya Olivia's director and Doc Orsino's conspirator in teaching Cesar initially how to seduce and woe Donya Olivia. Luciano is the big-hit shallow director who, as Phillip plays him, lets us love his outlandish ways, "I-won't-take-crap-from-you" attitude, and ability to spread good intrigues all throughout the play.


The supporting cast of Toma, Antonio, Maria, Eric V. Dela Cruz as Rudy, Roi Calilong as Valentino, and Tricia Husena as Juvy indeed give full support in their interactions with and for the main characters. You will find yourself loving each of these quirky, zany characters and more than once, wish you were on the round stage with them, laughing and conspiring together.


D' Wonder Twins of Boac should become choice viewing for all who love a good laugh, excellent scripting, and grand emotional musical numbers. Get tickets now for something new and fun at PETA Theater Center with the dual characters played by Cris Villonco.