REVIEW: Jenine Desiderio shines as the snake goddess in Ibalong, a vibrant staging of a Bicolano myth 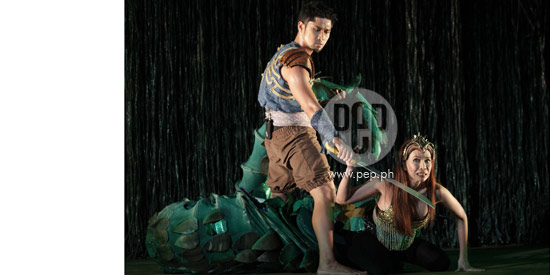 Myke Salomon is cast as Handyong the conqueror while Jenine Desiderio plays Oryol. Ibalong will be staged by Tanghalang Pilipino from February 8 to March 3, 2013 at the CCP.

In Ibalong, Oryol (Jenine Desiderio) transforms herself into a maiden in order to seduce Young Handyong (Cheeno Macaraig) who captured her brethren, the mythical creatures of the forests.

The story is based on a 60-stanza translation of an ancient Bicolano myth. From a germ of an idea, playwright Rody Vera was able to create nearly a whole universe. He was able to highlight man’s greed and the need to protect nature in this case, which includes the creatures that inhabit them.

Both Bicolano themed productions were staged at the Cultural Center of the Philippines. Ibalong currently runs from February 8-March 3, 2013 at the Tanghalang Aurelio V. Tolentino of the CCP. Both myths also represent actual fiestas: Ibalong in Legaspi is held every August. The Daragang Magayon Festival is a month long celebration for the whole Albay province held on the month of April.

Very often in film or theater we hear about the technical side being praised. In this case, production was truly crucial in making mythical beasts on stage "believable."

Director Tuxqs Rutaquio was able to orchestrate a lot of the elements to effectively stage the imaginative script of Rody Vera. An important part of the play is the very colorful and elaborate costumes designed by Leeroy New. The Opon character played by Red Nuestro was a huge head of a wild boar that covers more than half his body. Actor Red Nuestro had to open and close the costume’s large "mouth" with his arms to deliver his lines. The design successfully projected the enormity of the beast, which he was playing.

Jenine’s character Oryol had a very long snakelike body, which writhed and moved realistically, even in fight scenes. Lighting by Katsch Catoy had to be perfect in order to hide the puppeteers, Bobby Superales and Denise Linsangan, who was in charge of manipulating Oryol’s serpentine body.

The whole cast has to be commended for executing the very elaborate and exciting action sequences on top of delivering lines, singing and dance choreography. This is one production that will capture the imagination of kids. The colorful costumes and action packed scenes are not only there as eye candy but also delivers a great message of caring for the environment and all living creatures.

Jenine Desiderio is well equipped physically for the revealing costume and role. The temptress in her is a natural fit for the mystical snake goddess, Oryol. She also has the incredible vocals to deliver the difficult songs.


Myke Salomon is a beatbox artist who is also part of TV5’s Sabado Boys. Salomon plays the character Handyong who is one of the great conquerors representing humanity.


Musical director Carol Bello made use of native instruments such as the kali drum, tungatong, kubing, gangsa and many more. The band Inkantada, who used these native instruments, gave a pre-Hispanic or pre-colonial feel to the music.


Ibalong is one of those musicals that has to be seen by younger audiences and provides a rare insight to a Bicolano myth.