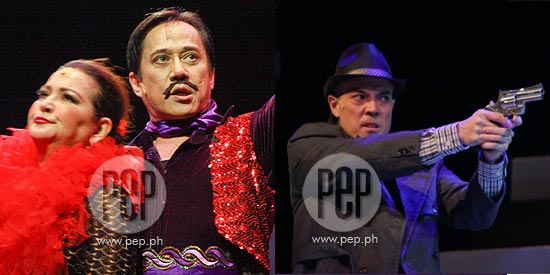 Pinky Marquez (wearing red) is cast as Carmella while Audie Gemora plays Ramon in Repertory Philippines’ No Way To Treat a Lady. Joel Trinidad (holding gun) portrays Detective Brummell in this murder-mystery musical. It will run until March 24, 2013 at Onstage, Greenbelt 1, Makati City.

"Rule number one: never send your audience into rigor mortis," says the eerie yet commanding voice of Alexandra Gill to her son Christopher "Kit" Gill in No Way To Treat A Lady. This off-the-beaten-track, murder-mystery musical presented by Repertory Philippines certainly lives up to this rule.


No Way To Treat A Lady has been adapted from a novel of the same name by William Goldman. He says the novel was inspired by the infamous Boston Strangler of the 1960's, and the book in turn was also made into a movie in 1968. Douglas J. Cohen then wrote the musical in 1987, keeping the title, and first presented it on off-Broadway in 1996.


Pinky Marquez plays Alexandra Gill, the veteran Broadway actress who, in the musical's storyline recently passed away. Her character leaves behind her son Kit, who tries his best to live up to her expectations and please her.


Kit can't seem to find recognition as a Broadway actor or costume designer so in his obsession to finally gain his mother's approval, he begins strangling older women who serve as her surrogates. Kit—whose menace and manic passion were executed to near perfection by Audie Gemora—becomes a serial killer.


Throughout most of the musical, Alexandra interacts with Kit through voice only, as Kit imagines conversations with her, constantly seeking her approval and never getting it. She haunts his waking hours and all Kit can do is think of new deadly ways to get her to affirm him.


Pinky as Alexandra sounds very domineering, always with a condescending and disapproving tone in her voice. She can't believe that her son is such a failure, even saying, "whether you're a successful killer or actor, you still can't get arrested in this town!" Kit has already killed at least six people by this time, and he believes he has landed his coup de grace by being headlined on The New York Times front page. Yet it's never enough and the unhealthy fixation of Kit trying to gain his mother's thumbs up is ready to finally tip him over the edge.


Pinky Marquez also plays the roles of the women Kit strangles: from kind, unsuspecting old lady Mrs. Sullivan who is recently widowed; to the vivacious and lusty Carmella Tocci who lost her dance partner Paolo when he breathed his last as they were dancing on the dance floor; to the mysterious lady in a French restaurant; and finally to Sadie Bellows, the happy-go-lucky bar girl Kit meets in his Sarah Stone disguise.


Pinky's favorites are Carmela and Sadie, "they are my favorite because it's not me!" Being behind the scenes for the most part using her Alexandra voice and only appearing for short spurts of time as the other characters who are marked for death was not easy, "challenging kasi I had to change my voice and be a different person. But it's fun. Everyday you're putting so much energy to it..."


"As Mrs. Sullivan, the old lady, I had to change my voice and my walk and my hair, Sadie of course...anybody would love the role. I'm just glad I got to do it," Pinky says. The lady, whose friends call her Superwoman because of the many roles she has (businesswoman, teacher, mother, endorser, host, actress, friend), shone as she had to play five characters in No Way To Treat A Lady.


A big moment for Pinky was when she appeared as Carmela in an extended dance when she sings in a duet with Kit in his disguise as Arthur Murray, dance instructor. They sing and dance to "Safer In My Arms", ironic, since there is no other place more dangerous than Kit's arms and no spot more deadly to be in than your neck between his hands as Carmela soon finds out.


The two danced in complete discord as Carmela is trying to actually dance and at the same time throw herself at Kit, while Kit is busy building up to the final bow. The anticipation of the kill was palpable when Kit tells her, "I am so lucky to have a woman as my inspiration, perhaps you can follow in her footsteps..." Carmela smiles coyly and Pinky makes us believe that her character is really falling for the ruse employed by Kit.


Pinky and Audie's energy bouncing back and forth as well as their interaction was so deftly paced and timed, it was a privilege to be able to see these two veterans engage each in other in such magnificent fashion. They even got the chance to work with Edna Ledesma, and Pinky shares she is "the best! She's an international star, ballroom dancer slash Argentinian teacher, she taught us. We had to tweak it of course, to not look so serious, because after all, Carmela has been and is just trying to learn ballroom."


As Mrs. Sullivan, Pinky sings "Only A Heartbeat Away" in a nervous flutter, reminiscing the love and embrace of her dead husband as if he were only a heartbeat away. Kit as Fr. Fitzgerald, supposedly a caring parish priest, duets with her, but in his twisted mind, he wants to be there for her last heartbeat so he can send her on her way to join the dead husband. Pinky had to shift from the demure Mrs. Sullivan to the more vivacious Carmela Tocci in a matter of two songs, but she pulled it off brilliantly.


Did Pinky ever feel any sympathy at all for Kit, knowing how hard Alexandra was being on him all throughout the musical? Pinky says, "especially the last part, it is so moving, because she finally says bravo. But it was too late. And she finally kisses him on the forehead, which he always wanted and longed for. What a mean mom!"


It is during this point in Act Two that Pinky as Alexandra will finally interact with Kit, holding him in her arms.


This project marks the 16th time that Pinky has performed for Repertory Philippines since appearing in Sound of Music. She just came from her turn as the Wicked Witch of the West in Wizard of Oz, which wrapped in December 2012 and after No Way To Treat A Lady, she'll be donning an even more challenging role as Mrs. Robinson in The Graduate, which will also be produced by Repertory Philippines.


Still, Pinky is thankful and grateful to have worked with the amazing cast of No Way To Treat A Lady. Aside from Audie Gemora, the musical also stars Carla Guevara-Laforteza, Sheila Francisco, and Joel Trinidad. Pinky shares, "the best part is that you are working with professionals also, which is so much fun, no problem. Everybody is just so down to earth and they do their roles as best as they can and we learn from each other."


Directed by Audie Gemora, No Way To Treat A Lady in a nutshell focuses on the mother-son relationship's highlights and pitfalls, healthy and destructive friendships, and everyone's need for affirmation and recognition. It's not an ordinary murder-mystery intrigue! Throw in an outlandish Jewish mom, a career-driven NYPD detective and a go-getter art gallery professional combined with easy on the ears melodies plus smart and witty playwriting, and you have a merry mix of comedy-murder musical.


Tickets are also available through Ticketworld at Tel. No. 891-9999 or visit this website.