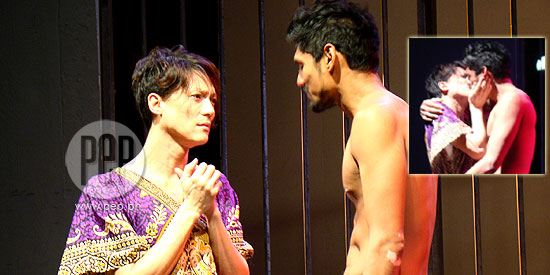 The sexual tension between BB Gandanghari (left) and model/indie actor Jet Alcantara was apparent in the play Halik ng Tarantula. Produced by BB Gandanghari Inc., the 2013 remake of this literary and cinematic gem was directed by Soxie Topacio.

Following the 1989 Filipino play adaptation of the internationally-acclaimed play turned film, Kiss of the Spider Woman, the BB Gandanghari-starrer certainly made a bold move by restaging this literary and cinematic gem.

The production undeniably carried a daunting pressure on its back as it revived Latin American writer Manuel Puig’s most important play for today’s Filipino audience. The cast also faced the intimidating fact that the powerful main characters of this play—Molina and Valentin—were previously portrayed to much acclaim.

In 1985, William Hurt portrayed Molina, a role that earned for him an Academy Award for Best Actor. Raul Julia was cast as Valentin.

In the Philippines, Mario O’Hara and Julio Diaz were the lead actors in Rene Villanueva's adaptation for the PETA production (1989).

An icy atmosphere coupled with excitement surrounded the set of Halik ng Tarantula in the Teatrino on press preview night. The stage looked as it should: limited. There is a makeshift cell where the characters of the homosexual window dresser Molina and the Marxist activist Valentin, prison mates, will be locked away from the world and forced to interact in spite of their conflicting ideals.

As the lights revealed a flawless and skinny BB Gandanghari with a towel wrapped around her head and a topless Jet Alcantara in his jaw-dropping winning form, already, the sexual tension between the two built up. Of course, this tension was anticipated by the audience at the outset (since the provocative play’s tarpaulin indicated that this is the actress “BB’s most daring role yet!”). The friction between Molina and Valentin was likewise what solely kept the audience engaged for the next two hours.

BB Gandanghari Inc.’s version of Halik ng Tarantula unraveled into a potentially powerful and harrowing production, only it struggled to step up to the performances of its precedent film and stage productions.

This is imminent the moment BB as Molina began the character’s storytelling of the melodramatic-themed Hollywood film Cat People (1943) as a means of escaping his and Valentin’s plight.

While Molina’s flirtatious, enthralling, and detailed narration should have been the strength of Halik ng Tarantula, BB’s portrayal failed where it should have succeeded. The actress was stunning on stage but her delivery of lines oftentimes lacked conviction and emotion, as if she was consciously grappling to recall the lines in her head. One could also suspect that BB’s articulation needed working on. It is either those factors or perhaps the actress had too big shoes to fill.

Jet Alcantara proved to be the more experienced thespian than BB. The model/independent film actor was able to achieve Valentin’s stubborn and arrogant character while articulating his character’s activist notions on gender, relationships, and politics.

Halik ng Tarantula had its gratifying moments, nonetheless. This was proven each time it elicited a resounding reaction from the audience whenever the interaction between Molina and Valentin became intense. The play is highlighted by these extreme scenes of heated arguments between the main characters as well by those tender moments when they show their genuine affections for each other.

A poignant scene that stood out in the play was when Valentin, poisoned by the food given to the prisoners, becomes vulnerable and gives in to Molina’s care. Valentin, who was mentally and emotionally fighting his feelings for Molina, finally breaks his impenetrable and egotistical facade and concedes to his inmate’s nurturing. When this happens, the plot reveals that Molina, who was said to have been imprisoned for sexual perversion, turns out to have previously connived with prison authorities. Molina apparently agreed to elicit information from Valentin regarding his revolutionary activities. But Puig’s play reveals a deeper level of loyalty and friendship between Molina and Valentin despite the said twist.

Despite the lapses in the acting, Halik ng Tarantula is able to deliver the themes the play is known for— emotions, desires, and the romantic musing of life opposed by the political ideals of revolutionary activism— that Molina and Valentin respectively stand for.

Towards the end of the play, the two characters are able to change each other as a result of their shared six-month confinement and suffering behind prison bars. Valentin convinces the once romantic escapist Molina to join in Valentin’s political cause. On the one hand, Valentin submits, during the course of the play, to his feelings and physical longing for Molina. Halik ng Tarantula, succeeds, in that aspect.