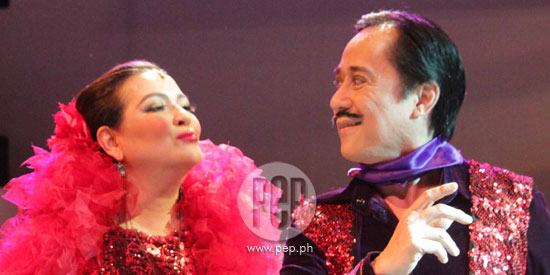 Pinky Marquez (as Carmella) and Audie Gemora (as Ramon) topbill Repertory Philippines' No Way to Treat a Lady. It will run until March 24, 2013 at Onstage, Greenbelt 1, Makati City.


All of these characters are formidably potrayed by veteran actor Audie Gemora who is cast as Christopher "Kit" Gill in the play No Way to Treat a Lady.


Audie is a man of many secrets and disguises in the five-person cast of this murder mystery musical presented by Repertory Philippines. Kit Gill is a troubled man, motivated to find success in all the wrong places and in the most deadly ways possible. He is haunted by the memory of his recently deceased stage actress mother who was very successful. In his deranged quest to gain her approval, he becomes a serial killer, with the hope that his murderous acts will land him on the front page of The New York Times.


The milieu of the musical, as Audie explained, is set in the 1970s, when detective programs were the fashion. In those days, Audie explained, "to get into the newspapers, people became serial killers." The musical is also more of the film noir genre. Audie points out that this is reflected through the various set pieces and color scheme used in the set design.


As a serial killer, Kit Gill assumes various disguises and roles. The nuances and gestures for each one are different, aside from the outlandish costume changes, yet Audie goes seamlessly in and out of each character. He makes the audience believe that he has become a different person with each sway, step, or stomp every time he enters the stage.


On top of that, Audie also holds directing credits for this murder-mystery comedy musical. How did he feel about all this? He reveals, that it was "very stressful. I wish I was able to do just one. Force majeur, e." Audie ended up taking over the director's chair because they lost their director. He explains having to spend the first month directing, "then the last part getting into my role, so hindi na ako makanood ng show, I don't know what the show looks like!"


All the hard work is evident because No Way To Treat A Lady was extremely well-received during its sneak peek and through its first weekend.


Audie says that playing his only female disguise, Sarah Stone, "was quite easy actually." Aside from that, "the dance sequence was the easiest because I dance naman," referring to his dance instructor disguise. The challenges for him were "shifting my voice, para maiba siya like Carlton has a higher register. It's quite tough, I'm still trying to get into the role." He hopes that as the musical goes through its run, he will get to uncover more nuances for the various roles he takes, and that his accent preparation is enough. "I studied the Irish accent, the Scottish accent, the French accent, because you can download everything in Google naman."


In a matter of minutes or sometimes even seconds, Audie's primary character Kit Gill has to transform into his various disguises. Audie says, "changing costumes, this is the hardest! You should see me backstage...I have two dressers helping me at the same time, otherwise nakakalito talaga. It will get easier as the time goes. Now that we have an audience, we can pace ourselves according to the laughter, it's gonna be right on."


His favorite role to play seems to be, "based on the reaction, the dancer, obviously!" Dance instructor Arthur Murray is the disguise Kit Gill uses to entrap the voluptuous has-been dancer Carmela Tocci (played on-point by Pinky Marquez). Their sequence, conversation and duet "Safer In My Arms," serves as one of the main highlights of Act One, as Kit starts coming into his own as a killer, Carmela being his second victim.


Audie enjoyed doing his various roles, stressful as it may have been, and the enjoyment is transferred to the audience effectively. Audie says that as an actor, pieces like No Way To Treat A Lady are what they look for, "it is the joy to really act, it's a real challenge to all actors, we look for opportunities to really tell an authentic character and all that. That was a joy."


Originally, the musical was made for a four-character cast, but for the local adaptation, they turned it into five. As a director, Audie says doing No Way To Treat A Lady was "sheer joy, the music was great, the comedy was perfect and it reminded me so much of sitcoms of the yesteryears, batang '70s ako, e. It really reminded me of the TV shows of that time."


What glues the musical in effect is the main storyline of Kit Gill. So even if Audie had to take on nine different "faces" and personas, behind the characters is still the same person: "He is basically just waiting to be noticed, it's obviously a deep-rooted dynamic between mother and son." This is a complex that children of stars contend with, "yung medyo living under the shadow of a parent."


Of Kit's mother, Alexandra Gill also played by Pinky Marquez, Audie says, "she is bigger than life, while he is an unemployed actor, she was the biggest star around. She was probably very hard on him." Though most of their interactions were in moments when Audie as Kit would be speaking to his mother's grand portrait and Pinky's voice could be heard in the background only, one could appreciate the cowering fear Kit felt talking to her, even as he tries to show her the ways he has cooked up in order to gain fame and recognition.


"It was that driving him to try to achieve something, and somewhere along the way, nag loose screw siya. So that desire gets more and more crazed. It's easy to maintain that because the character is the same, just takes on different...but the same objective: to get known, be noticed and be affirmed by his already dead mother," Audie expounds, showing why Kit Gill as a character can resonate with anyone because of the basic desire that drives him.


No Way To Treat A Lady, in Audie's own words, has so many elements and we can take our pick of drama, music, comedy, staging. He continues, "we have a fantastic stage and being able to utilize it and bring you with us to wherever it is." This musical is a must-watch because "it's got all the elements of entertainment, laughter, music, and a little bit of truth in the character."


Kit Gill is not the good guy but towards the end, you will experience a twinge of real sympathy, and you can gleefully blame Audie Gemora for excellently portraying a serial killer, helping you understand what goes on in the mind of someone such as Kit.


Audie points out, "It's important for me to portray him na 3-dimensional, kasi even though I'm playing all these funny characters and disguises, deep down inside I have to keep it real."


For details of show, please call Tel. No. 571-6926 or Tel. No. 571-4941 or email info@repertory.ph or log on to www.repertory.ph. Tickets are also available through Ticketworld at 8919999 or visit www.ticketworld.com.ph. Visit www.repertory.ph, subscribe to youtube.com/repertoryphils and “like” Repertory Philippines on Facebook.