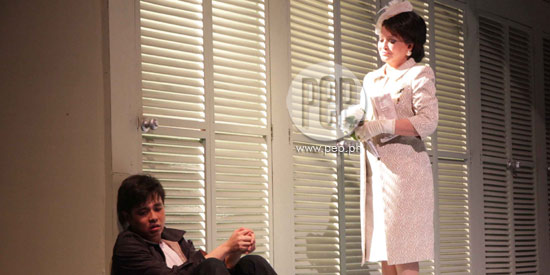 Reb Atadero (left) is cast as the confused young man Benjamin Braddock while Pinky Marquez plays the strong-willed Mrs. Robinson in Philippine version of The Graduate.

What is the price of seduction? Pinky Marquez as Mrs. Robinson in cult classic The Graduate finds out just how much it will cost.

Here's a quick refresher on The Graduate: Benjamin Braddock, a fresh grad, comes home to his suburban California life with no real plan or direction but gets saddled with pressure from family and friends to make a career for himself.

Blatantly waking Ben up from his malaise is sophisticated and bored socialite-housewife Mrs. Robinson with whom Ben finally starts to get some bed action going in the form of a dangerous affair.

Dangerous and risque because Mrs. Robinson is the wife of his dad's best friend and law partner. But even the passionate yet illicit tryst doesn't satisfy Ben for long and he ends up being set-up with Mrs. Robinson's daughter Elaine, who Ben's parents believe to be a suitable match for him. After a disastrous first date, Ben ends up falling in love with Elaine and conflicts start to come to a boil when it is revealed to Elaine, Ben's parents and even Mr. Robinson that Ben and Mrs. Robinson had something very naughty going on.

The Graduate, when it was first released as a film in 1967, proved to be a breakout movie role for Dustin Hoffman who was happy being an ethnic theator actor playing off-Broadway roles. The role of Mrs. Robinson made such an impact on Anne Bancroft's later career, becoming an iconic role and the signature work she could never get away from. Actresses such as Kathleen Turner and Linda Gray, who have filled in the shoes of Mrs. Robinson for the stage on Broadway and West End, also left their mark on this unforgettable role.

Now it's Pinky Marquez's turn. And she does it bare-naked in one very crucial scene. She isn't alone, as lead star Reb Atadero who plays Benjamin Braddock, also sheds his clothes for bed action with Mrs. Robinson. Just to add even more spice, stage actress Natalie Everett also shows off almost everything in her stripper scene, which happened during the first date of Ben and Elaine.

NO INHIBITIONS. For those familiar with The Graduate (in book, film, Broadway or West End version), the nude scenes are expected--even if each version has handled it somewhat differently. Anne Bancroft as the film Mrs. Robinson showed a leg and the implication of a naked body while the stage versions went all out with Kathleen Turner, Linda Gray, and Jerry Hall showing off their God-given birthday suits, to name a few.

During the April 5 show that served as the opening and press night for The Graduate, photographers were asked to not take photos during the first act, understandably as all the nudity happened in Act 1. To further ensure that the nude scenes wouldn't be perceived as vulgar, lighting designer John Batalla (who did lighting for all of Rep's 2012 and the two 2013 productions) effectively employed the use of shadowing and other devices.

Female lead Pinky Marquez, seen on the theater stage just last month in Repertory Philippines' No Way To Treat A Lady, did not disappoint as Mrs. Robinson. She dropped all inhibitions and her white robe, showing Benjamin Braddock, the male lead played by Reb Atadero, her front while the audience had several seconds to see her bare back, bottom and legs.

The scene started with Mrs. Robinson "accidentally" entering Benjamin's room as she looked for a spare room where she could lie down and rest. Their chemistry slowly builds up through a series of awkward and veiled, intended-to-be-misunderstood innuendos between the two leads.

Benjamin tries several times to get Mrs. Robinson out of the room as he is still very confused and out-of-sorts following his encounter with his parents and Mr. Robinson. As a newly minted graduate who achieved a lot in school, they all expect Benjamin to step up, contribute to society and do something great with his life. Benjamin can't be on a more different page than them, and he is sulking and hiding out in his room (the setting is his homecoming party at the Braddock's home). Clearly, seduction and affairs of the heart are the farthest things from his mind.

When Mrs. Robinson asks Benjamin, "May I ask you a question, what do you think of me?" Benjamin starts to get even more flustered and answers, "This is a rather strange conversation and I really ought to be going out..." Reb is spot-on as a young adult male, unsure of himself, nervous, jumpy and tense all at once.

When Mrs. Robinsons reveals even more details of her personal life (that she is an alcoholic and so on), Benjamin firmly declares, "Mrs. Robinson this is none of my business!" Pinky barrels on, portraying a very strong-willed, confident and bigger-than-life Mrs. Robinson throughout this exchange.

"Oh my God, no, no! You didn't think I would do something like that...," Benjamin stammers and shouts when it dawns on him that Mrs. Robinson asking him to drive her home is suspicious. He shouts, all panicky, "Mrs. Robinson, you're trying to seduce me, aren't you?"

This signature line has the whole audience laughing as Reb repeats the line, with less confidence. Pinky calmly replies, "Well, I haven't thought of it..." This whole scene is meant for Benjamin to think he isn't being seduced when he actually is and shows just how glibly and casually Mrs. Robinson toys with him in their first encounter.

WHY CHERIE GIL COULD NOT BE MRS. ROBINSON. Pinky Marquez stepped in as Mrs. Robinson after Cherie Gil, whose name was highly publicized in 2012, couldn't commit to the timeline of the play due to the latter's role in a recently concluded teleserye.

"She would have done her own way, but it's given to you for a reason. When she couldn't make it for this month, I was asked by Repertory's Baby Barredo and I said yes," Pinky explains.

"I'm sure I said if I just do my best then everything will fall into place, Cherie Gil is Cherie Gil and I just did my own, she has her own, anybody can do their own Mrs. Robinson, there really was no stigma on how she could have done it, it depends on how you understand the role...," says Pinky on whether she felt she had to match or "higitan pa kung ano man ang possible performance ni Cherie Gil kung natuloy eto sa pagiging Mrs. Robinson."

Pinky admits, "I have honestly not seen the movie--only on YouTube--which is good because it's fresh and I have not seen it live in theater either, I just based it on the script on how I understand it."


"SCARED" TO DO NUDE SCENES. How did Pinky feel about doing the nude scenes? Was she scared? Pinky candidly admits, "in the beginning, yeah, scared, but as you understand the role and what you should do, I think not anymore," she ends up grinning widely.

Did she experience any awkward moments with lead star Reb Atadero who is several years her junior? "Nope, not now, maybe in the rehearsals...I went through a process talaga," Pinky answers. Reb and Pinky were both naked at one point, in a post-coital scenario of bed scenes done by moving the bed stage front then back again, front then back again to signify movement and a different location with each meeting. Throughout this movement, both actors were under the sheets, making lovemaking noises and moving up and down.

She adds, "It helped a lot from 'shall I do it, should I compromise' and later on as I understand and delved into the script and understood her role, it's no big deal na...it's part of...I just did Mrs. Robinson's part."

As friends and regular theater goers started hugging and congratulating Pinky on this feat, she couldn't stop the tears from flowing. She can't pinpoint any exact milestone moment in the play for her, as she considers them all milestones, "Everything is important, especially the drunk scene with my daughter where they talk about love, everything, how I didn't love my husband, the bedroom, the hotel..."

There is one big scene in Act 1 between Mrs. Robinson and Elaine that wasn't included in the film version but was featured in the version staged by Repertory Philippines. This scene allowed Pinky and Cara Barredo (who played Elaine) to highlight all the more the dysfunctionality of their relationship as mother and daughter.

Elaine just found out that her mother had been the lover of Benjamin, who at that point had expressed his interest in her, to the point of marrying her. However, the mother and daughter pair ended up not really talking about the big issue, instead drinking and talking about everything but the truth, as Pinky shares, "I [her character Mrs. Robinson] didn't admit anything, I said I told you it was him [Benjamin seducing her] so I also lied..."

Pinky points out how The Graduate offers a good lesson for everybody. "To watch that we should be more sensitive to each other, not to ourselves but to the other partner, so it's always to think more of others, to be sensitive, and have open communication because sometimes we don't know what the other is thinking or what's going on because it's all covered up with icing...maraming plastic..."

She even readily tells us that having gone through the first night of The Graduate, "it's very moving, I wish I could watch it because I want to be there in the audience."

She considers working with Jaime del Mundo, who played Benjamin's father Mr. Braddock, a treat, especially because as The Graduate director, "he is very good because he led you into it, he didn't force you into it and day by day we would be reading for three weeks until you understood your character and understanding of each other's role and who we are, that's the most important thing," explains Pinky, shedding light on how comfortable she and her lead male star were in their soul and skin-baring roles.

The Graduate is something anyone can relate to, according to Pinky and everybody will find something in it to appreciate, "Everybody should watch: parents, daughters, fathers, mothers, children, they should watch because it's the unspoken words we are saying it on stage and it's like we are speaking it to them so that when they go home, they understand that it is a matter of communicating."

The Graduate, brought to stage life once again in 2013 by Repertory Philippines, leaves a mark on Philippine theater because as Pinky believes, "I think it's bold, it's honest and I think it's good and it's about time that people see it, you can read books but this is book live."

Considering the crazy things for love that her character Mrs. Robinson did in The Graduate, Pinky gets a little personal and shares not so crazy but very sweet things she has done, "For love so many, my husband I guess, the best thing that ever happened, loving him forever, you should really communicate more with your husband and pay attention," she says with a twinkle in her eyes.

Local stars G Toengi, Tim Yap, Ping Medina, and Micah Munoz (actor and boyfriend of Cara Barredo) were among those spotted at the opening night of The Graduate last April 5.

Catch Pinky Marquez as Mrs. Robinson in The Graduate until April 28 at Onstage, Greenbelt 1, Makati City. She is also set to appear next as the fairy godmother and the evil stepmother in Cinderella at the Resorts World from September to December 2013. While preparing for these roles, Pinky still has her hands full with her home business, workshops, and teaching.