Karylle to play the lead in Rodgers and Hammerstein's Cinderella 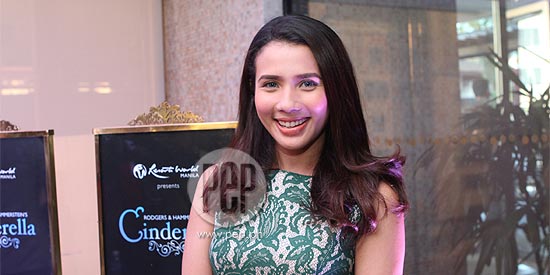 "This has always been one of my dream roles,” says Karylle after she was introduced as the newest Cinderella. This musical play will be staged at Resorts World Manila.

Karylle was topbill the new version of Rodgers and Hammerstein’s Cinderella. In an interview with Karylle last April 23 at the Maxims Hotel Terrace, the actress said that it surreal being chosen as the lead.

FULFILLS DREAM OF BEING A PRINCESS. For Karylle, protraying the role of a princess is a dream come true.

“This has always been one of my dream roles,” says Karylle.

She narrated how much of a fan she is of Cinderella, “I remember watching Ms. Lea Salonga again in the CCP main theater.

“I went on my own and I really loved the musical.

“Tapos after, I actually have her autograph.

Cinderella is considered a timeless fairy tale. How will they differentiate this version from other movies and other plays?

“I am actually excited about the ideas I’ve heard,” revealed Karylle.

“Pero this is an updated verison because they are going to...Paano ba i-describe without telling too much?” she said excitedly.

“By making it more modern in ways that would really make it memorable for everyone.”

WORKING WITH CHRISTIAN. Karylle and Christian Bautista have a long history of working together with each other. Why do they think producers often pick them to be paired in these kinds of projects?

Karylle explained, “It’s been years actually since we’ve been together on stage.

“Of course we did Rama Hari pero it is more of a dance and a ballet musical but this time we are doing a full musical.

“But really I am looking forward to sing and be on stage again.

“This time I am excited what new thing am I going to discover about Christian.”

Does Karylle feel pressured since previous plays in Resorts World Manila--such as Sound of Music and The King and I--were well received by the public?

“There are so many plays opening every month that I personally try to watch but hindi ko naka-catch lahat ng plays sa sobrang dami ngayon.

“So I think right now the focus is on how could the theater scene evolve.

How does she feel to be part of a play on a grandiose stage?

“Siyempre hindi ako makapaniwala kasi this is one of the biggest things I’ve done in a long time na: Cinderella.”

She adds, “Siyempre everybody knows who Cinderella is and of course just to work with Christian once again is something I feel comfortable with.

“It’s something I know I can excel in kasi when we’re together.

“It is truly magical para sa mga kabataan, para sa lahat, for people of all ages to be brought back to your childhood and to be back on that fairy tale again.”