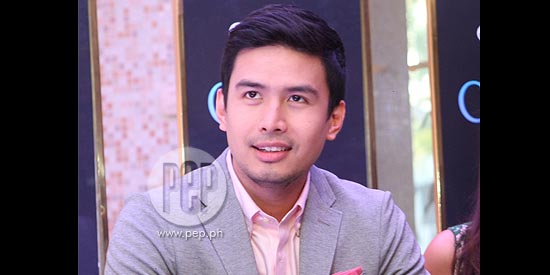 Christian on giving new life to a timeless fairy tale: "That’s the challenge so right now as an actor maghahanap kami ng ibang angles na siguro hindi pa nape-present before like for example you can love in many different ways."

Christian Baustista will be the Prince Charming of Karylle in Cinderella.

After being paired recently in the dance musical Rama Hari, Christian and Karylle will work together for Rodgers and Hammerstein’s Cinderella.

In an interview with PEP.ph (Philippine Entertainment Portal) last April 23 at the Maxims Hotel Terrace, Christian shared his happiness on working again with Karylle onstage.

“’Coz we know each other so well, we work each other very well, we know our ins and outs our little things. We work hard, we work together, we support each other and we have each other’s backs.

“And makikita niyo rin yun on stage which keeps on growing.

CHRISTIAN AS PRINCE CHARMING. Unlike Karylle, Christian was handpicked for the role of Prince Charming. What does he expect in this huge production?

The singer explains, “Of course I am really excited on the technical aspect na gagawin ng aming directors and Resorts World for this show.

“So meron mga technical things na I would say personally I have never seen before in this country na gusto natin.

“I am also very thankful na I am with Kaye [nickname of Karylle] again and I really miss her.

HANDLING PRESSURE. The play Cinderella will be shown after the successful run of two popular plays: The Sound of Music and The King and I. How does he handle the pressure?

Christian explains, “There is that pressure always naman, e.

“As an artist whether it’s musical, an album or your next song, the challenge is to not rest on your laurels and just keep on doing better.

“So far so good, Sound of Music, The King and I and now Cinderella it rests not just on us, it’s a team effort.

“Yes there’s pressure but we will use that pressure to make a better show a good show.”

GIVING A NEW LIFE TO A TIMELESS CLASSIC. How will his portrayal be different from previous versions of Cinderella?

“That’s the challenge so right now as an actor maghahanap kami ng ibang angles na siguro hindi pa nape-present before like for example you can love in many different ways,” says Christian.

He added, “You can wander in many different ways so what is that?

“With the help of our director and through a lot of workshops we will find it but more importantly the technical aspect na ipapakita naming sa stage is gonna be wonderful.

“They’re gonna pour in a lot of money and budget for the production and sometime yun din talaga ang inaabangan.”