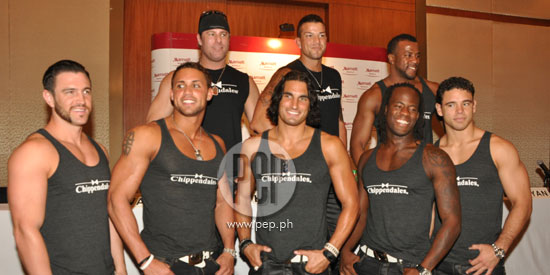 Did you happen to enjoy the Hollywood film Magic Mike, which starred Channing Tatum?

Ladies, now is your chance to see the hunky men of Chippendales dancing and gyrating in the flesh!

Bryan explained to Philippine Entertainment Portal (PEP.ph) how their performances will be different from those seen in the film Magic Mike.

“As for Magic Mike, they wear G-strings, they get tips, dollar bills— that’s not how our show is gonna be.”

But if you’re expecting to see a performance similar to the film, Bryan assures viewers that, “you're gonna see stage dancing [like] in Magic Mike, yes, you're gonna see that.”

“DISNEYLAND FOR WOMEN.” This is not the first time the group has performed here in the Philippines.

Way back in February 2011, they made Filipinas go crazy with their two-day show at the Newport Performing Arts Theater, Resorts World Manila.

Since this is their second time in the Philippines, what can audiences expect from this year’s show?

Kevin, who is one of the old-timers in the group immediately remarked, “You know it’s really considered as Disneyland for women.

“It's female fantasy brought alive on stage—that’s what we do.”

Bryan then encouraged those who will watch the show by saying, “The biggest chance to be on stage is to be crazy— so go crazy!”

RESTRICTIONS. While performing in other countries, they have noticed that ladies could become too “wild” and “crazy” during their shows.

Kris, who is another old-timer in the group, says there are restrictions placed on them while doing their shows.

Kevin adds, “We’re gonna give normal shows as [much as] possible.”

CRAZY EXPERIENCES. Still,there are times when some ladies go overboard after seeing these muscular guys in the flesh.

Luckily, these guys are able to handle these kinds of tricky situations.

Kevin recalls one particularly unforgettable incident. “I was actually in Europe in a hotel room. Then I heard this knocking, there’s someone in my window.

“They were trying to get through my window.”

For his part, Kris revealed that his fans were audacious enough to watch him sleeping.

Repressing a laugh, he narrated, “In this hotel room, you have to lock it from outside and the inside, I didn’t know that.

“So I came home from the show, I was tired, I passed out. I woke up and found two people staring at me.

“I was kind of so confused. The girls were like, ‘Yeah, your friend said this is your room.’ I was scared at first, but then we laughed at it.”

Want to see your fantasies played out onstage by the Chippendales?

You can watch their performances on the following dates: June 11 at Marco Polo Plaza, Cebu City; June 13 and 14 at Resorts World Manila, Pasay City; and June 15 at Hotel Stotsenberg, Angeles City, Pampanga.