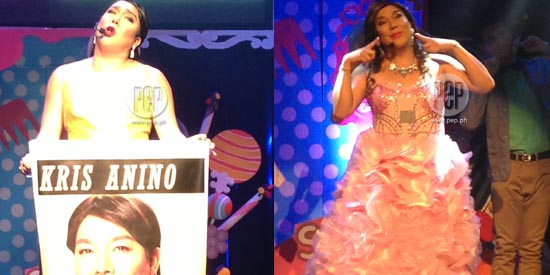 Two of the show's most applauded numbers: John Lapus impersonating his good friend Kris Aquino (left) and doing his version of Gwiyomi.

In celebration of his 20th year in showbiz, John Lapus showed stand-up comedy in its raw yet fine form.

He didn't invite a lot of big stars— though Angeline Quinto did pretty well in mesmerizing the viewers with her set; Enrique Gil earned shrieks from the young ladies; Markki Stroem and Alex Castro were game in entertaining the audience.

It was a hell of a show nonetheless, relying solely on John's witty spiels and comic antics.

Last night, June 16, at the Music Museum, here's an excerpt of his opening:

(He didn't say the latter's name, but people knew he was referring to Jobert Sucaldito— who, in 2011, wrote about the alleged "pagwawala and pambabastos" of the the Star Magic talent in a bar. John sued him for libel.)

Most applauded was the Kris Anino segment, where he impersonated his good friend Kris Aquino.

This (among the many) earned chuckles from Star Magic bosses Johnny Manahan and Mariole Alberto, who were seated beside ABS-CBN executive Leo Katigbak, actor Sam Milby, and Pinoy Big Brother winner Slater Young.

Moving on, aside from announcing her bid for Vice President in 2013, Kris Anino also named the members of her Cabinet, some of them— Vic Sotto as secretary of finance "para ang pera ng bayan, Juan for all, all for Juan; Annabelle Rama as secretary of defense, "takot lang ng China..."; Lolit Solis as budget secretary "sa galing niyang "mang-harbat...."

Kris Anino also highlighted one of her plans: launch "Artistagram," which will take the place of jejemon words.

Example, if you have a tiff with your sister and you're planning to sue her, "i-Cristine Reyes mo!"

It was a showdown between Tweetam (John) and Ryzza Mae Dixson (stand-up comedienne Petite) hosted by Julia Clarete (Eat Bulaga!) and witnessed by lady boss Malou Choa-Fagar herself.

Did he do some bashing? Yes... but none of it offensive, malicious or mocking! His brand of comedy humor was more subtle, interjecting, "Narinig ko lang... sasabihin ko sana... sabi lang sa akin..."

For almost three hours, John Lapus captured the highs and lows of his career, who's in and what's hot, in form of witticisms, jokes, and punch lines that had the viewers in stitches.

And though there wasn't a song number, "kamukha ko lang si Jet Pangan," or a dance number, "matanda na tayo," he remained the unstoppable John Lapus... "universal sweet" to all.