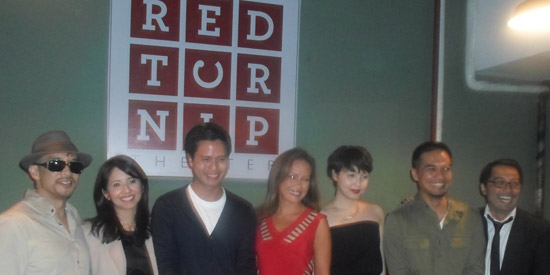 Red Turnip is a new theater company. It is put up by five friends, all identified with the local theater (in particular, Repertory Philippines). Red Turnip is composed of Topper Fabregas, Jenny Jamora, Ana Abad Santos, Cris Villonco and Rem Zamora. These five thespians have over 50 years in the industry between them.

This new theater company aims primarily to bring their talents and passion together to stage the kinds of productions that are in short supply in the country: contemporary straight plays, modern stories with an experiential angle, challenging material with the potential for adaptation and site-specific performances.

Why did they choose Red Turnip as the name of their theater company?

"The late Zenaida Amador, who, at one point in all our lives, had served as friend, director, and of course mentor, way, way back before... bago pa kaming nasa Repertory Philippines, was quoted to have said this line, about a particular actor:

"'You can't squeeze blood from a turnip, but you can sure as hell paint it red...'

"Basically, she [Amador] could not get what she wanted from this actor. And that quote was about bad acting.

"But that is not the context by which we are taking that quote.

"That was something we all could share along with Tita 'Bibot' [monicker of the late theater stalwart who started Repertory Philippines in the late 1960s]—her passion for arts, the theater."

With that is the group's collective vision for bringing onstage "the kind of shows that made them want to become actors in the first place, and continue to electrify them to this very day."

"If I may add to that," noted Ana Abad Santos, "if we can also reflect humor in our endeavors... and I think we totally did that. As we get older, we realize that, yes, humor has played a big part in our lives."

Recalling further the qualities of their late mentor, Ana said, "'Tita' Bibot was a very passionate [actor and director]; high tempered and made her actors shivering [in rehearsals] but, no matter what, she injected humor, just at the right time."

As actor and director, Ana Abad Santos, a multi-award-winning actress and director, may as well follow in the footsteps of Bibot Amador.

As actress, Ana has clinched an Aliw Award as Best Stage actress, for Mary Stuart; got multiple nods for her performances in such acclaimed straight plays, as Tanghalang Pilipino's A Streetcar Named Desire and Rep's The Joy Luck Club, and A Portrait Of The Artist As Filipino; and her direction in Duets, Hamlet, and The 39 Steps.


THREE YEARS OF PREPARATION. At the press launch for Red Turnip Theater, held at the Borough Restaurant, at The Podium, last July 18, 2013, all five actors welcomed their well-wishers and let everyone in on the beginnings of the theater company.

"Our new baby..." Rem happily said, as he recounted, "the thought [of putting up a theater company] has been with us for about three years now. And we are just very excited to reach this point."

Rem—who entered the professional scene in 1992 and whose career took a leap in 1996 via Repertory Philippines' Jesus Christ Superstar and the original Filipino musical Miong—pointed out, "there's nothing new about turning out a new theater company.

"A lot of attempts in the past may have failed, but because they failed doesn't mean... give up na tayo doon.

"We just hope to continue where the others also succeeded; to continue that tradition," added Rem Zamora, whose other noteworthy peformances include PETA's Skin Deep and Glorious.

As theater actor, Rem earned a Gawad! Buhay Philstage Awards for the Performing Arts nomination, for Best Supporting Actor, for his role in Repertory Philippines' The 39 Steps (2011).

Rem's colleague at the Rep, Cris Villonco, shared in the good news, "We've got no worries, either. We have the blessings of Repertory Philippines. Everyone has been very supportive."

According to Cris, no less than the acknowledged Grand Dame of Repertory Philippines, Ms. Baby Barredo, "gave us all the encouragements we need to start pulling it off."

Cris Villonco, who is a scion of artists in the various fields, is the talented niece of award-winning filmmaker Carlos Siguion-Reyna and grandaughter of music icon, Armida Siguion-Reyna.

Named Time Magazine's Hero for the Planet in 2000, Cris Villonco is a multi-award-winning actress, with a degree in Liberal Arts with concentrations in Music and Economic Development from Sarah Lawrence College in the United States.

In 2012, Cris Villonco was Gawad! Buhay Philstage Best Performance By An Actress in a Musical awardee, for Tanghalang Pilipino's Noli Me Tangere, The Musical. She also got critical nods for her performances in the 2012 productions of Walang Sugat (for TP), Jekyll and Hyde and Leading Ladies (both for Repertory Philippines) and The Sound of Music with Resorts World Manila. She has likewise appeared in recent acclaimed productions of Atlantis Productions, Dulaang UP, and the Philippine Educational Theater Association (PETA).


BEGINNINGS. What was the point wherein they all got together and sat down to discuss the plans for a new theater company?

Topper Fabregas puts it precisely, "Around 2 and a half years ago, we—Jenny Jamora and I—had a reading.

"So we got all the facts together; the stuff together, and had Ana [Abad Santos] to direct the reading.

"So, parang nag-synch in lang talaga. And we decided to come up with something... we wanted to get people from different theater companies to read materials.

"And while we're in the process of doing that, 'Hey, since we've always dreamed of putting up our own company, here we are, trying to...'. We just thought, why don't we just do it, finally. And we decided to just do it!

"We asked Rem Zamora and he said, 'Yes, let's do it!' And everything just fell into place from there, basically.

"So, here we are... two and a half years later, with Red Turnip Theater," Topper gladly announced.

He has completed his studies at the Circle in the Square Theatre School, in Manhattan, and has served as Assistant Director to several productions; and is also a Drama Teacher at Beacon Academy. His New York credits include A Midsummer Night's Dream, Urinetown, And The World Goes 'Round, As You Like It, and Much Ado About Nothing, among others.


RESPONSIBILITY. On the other hand, Topper's partner, Jenny Jamora, recalled, "It began 3 years ago, with a collective wish: 'Oh, I wish this would be staged... Oh, I wish... [this could be adapted].

"So, we might just do it., And that's what we did when we finally found the right friends who have the same mind-set.

The initial steps, while bringing in much excitement, at the same time, carried with it a heavy load of responsibility.

"And we took on the responsibility to ourselves," Jamora explained.

"Since we are all coming from the arts [fields] in this industry, we thought, what better way to spend a career in the arts, and with the people we love, than create the things that we love.

"At the same time, sharing them with our friends around us and the society that we're part of."

Jenny added, "Hopefully, we do that, not so selfishly as just to please ourselves, but in the hope of sharing with everybody around us, in a very experiential way; very evolving way.

"We hope we'll have materials that are emotionally powerful and involving. That really touches you [as our audience]."

As head of the Talent Development and Training Committee of the two-year old Theater Actors Guild (T.A.G.), Jenny Jamora has a vision in line with her co-actors' involvement in the worthwhile endeavor for the benefit of their would-be audiences.

As theater actor, Jenny Jamora was last seen in the Virgin Labfest 2013 entry, Owel (as the hilarious Miss Janet) at the CCP. She was also lead in the recent world stage debut of Paul Fleischman's Mind's Eye.

Jenny Jamora was nominated for an Aliw Award for her performance in The Blue Room and has performed around Asia for The Vagina Monologues, Aspects of Love (New Voice Company) and A Little Night Music (Atlantis Productions). She holds a Shakespeare Acting Certificate from the Royal Academy of Dramatic Arts in London, and a Master of Science from Texas A & M University.


NICHE. For a business model, will it be pre-selling "educational" plays, in schools; or relying on grants, commercial appeal? What will be Red Turnip's niche in the theater market?

With a bit of certainty, Rem shared, "I guess, while none of the [acknowledged] business models work, since the audience keep on changing, we'll adopt several business models.

"Yes, we will show it in schools, perhaps. We will have our niche, we'll gonna try several tactics; and adapt as much as we can. And, hopefully, we get the audience. Hope they get addicted to theater."

"I don't think one business model works, as the audiences always change. So, it's a formula that doesn't always work," Jenny agreed.

"But we keep an open mind. Always listening to everybody for suggestions... and collective decisions," Cris pointed out.


CLOSER AND COCK. Having introduced the new theater company and its founders, what will be the first play of Red Turnip Theater?

Ana Abad Santos informed: "Our first play will be in October. It will be Closer and I will be directing it. It will be shown at Whitespace [in Makati]."

She added, "We plan to have irregular seasons. There will be big plays, small plays, and there will be 'guerilla' outings and stuff like that.

"Our first season is comprised to two plays: Closer by Patrick Marber; and the second play is called Cock by Mike Bartlett.

"These are two British-written plays, although the challenge is to make it very close to our experience.

"We don't think there is much difference between a British and a Filipino. So, that's our challenge, to have the Filipino audience share a grand personal experience with these two plays."

Topper added, "For Cock, we're still deciding on where we're gonna have it staged. But, definitely, it will be very intimate."

Cock is the second play of Red Turnip Theater, scheduled for next year in February 2014.

Closer is a four-character play by Patrick Marber, which depicts four people trading partners in search of love and lust. In 2004, it was adapted into film by Mike Nichols, with Marber writing the screenplay adaptation himself. Closer starred Julia Roberts, Jude Law, Natalie Portman and Clive Owen.

The play has been nominated for Tony Awards and has won the Sir Laurence Olivier Award in London.

Set design is by Gino Gonzales, lighting design by John Batalla and costume design by Raven Ong, and sound design by Jethro Joaquin, with original songs by William Manzano.