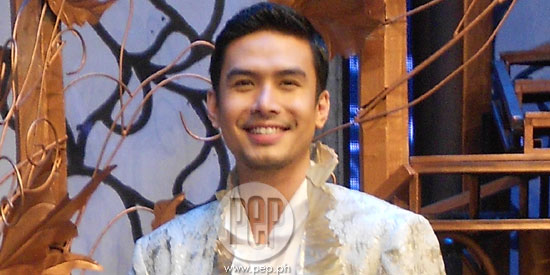 Christian Bautista feels lucky to be given the chance to do TV projects as well as theatrical productions. “Nakakatuwa kasi who gets to do this? I’m on TV one day and I’m on a musical the other.” (View photos: Christian Bautista and Karylle star in musical play Cinderella&

Christian Bautista said that he is more comfortable doing stage plays than teleseryes because he gets a momentary chance to escape from reality and widen his horizons as an artist.

“I always feel fulfilled when I’m onstage, and it’s also a form of escape, as well,” he said during a recent press conference for his upcoming stage play, Cinderella, that will begin on October 9 at the Newport Performing Arts Theatre in Resorts World Manila.

In the said play, Christian will portray Prince Christopher, the prince charming of Cinderella, with Karylle filling in the shoes of the favorite fairy tale character.

Currently, Christian is also seen in GMA-7's daytime teleserye, With A Smile, with Andrea Torres and Mikael Daez as co-stars.

Unlike musical plays, Christian confessed that he feels the pressure for their show to attain good ratings, given the cut-throat battle of TV shows today in terms of ratings.

With things like these to consider on a daily basis as far as his showbiz career is concerned, Christian is more than happy to welcome a diversion, as in the case of a musical play such as Cinderella.

The Kapuso star’s last project in a musical was Rama Hari (2012), and before that, The West Side Story in 2008, both with Karylle.

BEST OF BOTH WORLDS. Christian narrated that he recently bumped into a friend from ABS-CBN, which was Christian’s former home network before he transferred to GMA-7.

Christian happily informed his friend that he has finally landed a lead role in a teleserye and is able to offer his fans something new with his current projects.

“Yung fans natutuwa rin [na] finally [they] get to see [their] idol everyday as an artist.

“Yun ang gusto mo [as an artist]… how can I change or shake things up a little bit na mae-enjoy, na mas mae-excite ulit yung mga fans, mae-excite ka rin as an artist.

“Nakakatuwa kasi who gets to do this: I’m on TV one day and I’m on a musical the other?

Christian Bautista's With A Smile airs everyday 10:15 AM on GMA-7. He will star in Cinderella, which will be staged at Resorts World Manila starting October 9, 2013.