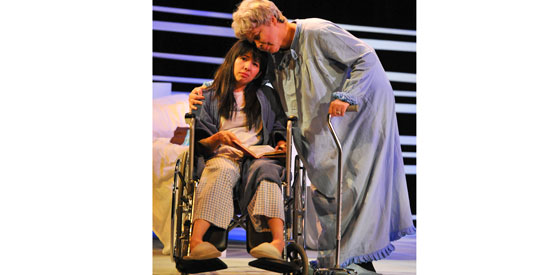 The imaginative play Mind's Eye tells the story of a former teacher Elva (Joy Virata, right) and a teenage girl named Courtney (Jenny Jamora, left). Mind's Eye will be staged from September 6 to 8, 2013 at the RCBC Plaza, Makati City.

Last year, award-winning novel Mind’s Eye had its worldwide stage debut in the Philippines. The play’s lead star, seasoned theater actress Joy Virata, was surprised—in a good way—at how people who came to watch it experienced a cornucopia of emotions.

“The reception was beyond my expectations,” said Virata, who will be reprising her role as the 88-year-old Elva. “People were asking me to restage it, and so here we are again.”

Mind’s Eye is based on a young adult novel of the same name, written by Paul Fleischman. It narrates the story of retired teacher Elva and rebellious teenager Courtney, whose paralysis from waist down compelled her to abandon the active life for—to her astonishment—a more exciting journey that only involved the imagination.

It will be restaged from September 6 to 8 at the Carlos P. Romulo Auditorium, RCBC Plaza, Makati City.

Also coming back to play as 16-year-old Courtney is another notable thespian, Jenny Jamora. Veteran stage director Jaime del Mundo will once again direct this year’s rerun of the play.

"A play in a hospital-like setting, dealing with art and love of reading and travel—all the things we live for in one sitting. As the play progressed, one really can't help but realize and appreciate how these simple things—set design, lights, music, characters—can spark up a lot of emotion and empathy," said research assistant Mita Santiago, 23, who watched the initial staging last year.

“If your eyes were closed as they described the scenery and made things ‘more real,’ you could have practically been with them there in Italy as well,” said Clarice Tee, who at a tender age of 14 appreciated the message of the play.

Jamora likewise received a variety of heartwarming compliments after her convincing portrayal. “My whole family was crying and told me it was my best performance ever,” she said. “My dad was crying because he actually thought I was paralyzed!”

One of the major draws to the play is how the characters were very relatable. “I heard a 15-year-old boy say ‘That’s me!’ to my character,” said Jamora. According to Virata, elderly women were crying and telling her how much they identified with Elva. “I think the play doesn’t just unfold the journeys of the characters. The audience are taken to their personal journeys as well, and that is far greater than the pomp of any other play,” Virata added.

Theater aficionados from the media also raved about the world premier of Mind’s Eye in November last year. “A play within a play within a play,” was how Lio Mangubat of Spot.ph described the intricacies of the story’s ideas. “Mind’s Eye may be an acquired taste as far as theater productions these days go but it provides plenty of food for thought and nourishment for the soul,” said Vlad Bunoan of ABS-CBN News Online.

In his newspaper column, National Artist for Literature F. Sionil Jose wrote of the play as “the triumph of the creative imagination over a grim reality... I recommend this play to devotees of the theater, our dedicated youth and old teachers and hacks like myself.” He also commended Virata’s “virtuoso performance.”

Mind’s Eye leaves its audience with a refreshing reminder to keep the fire for learning alive. Dr. Jaime Laya, head of the National Committee on Monuments and Sites, sums it up by saying “...lessons on linkages across generations, the heights to which imagination can soar, the wisdom of Shakespeare and the poetry of the English language, and above all, the resilience and indomitability of the human spirit.”

Mind’s Eye will be restaged on September 6, 7, and 8, 2013. Tickets are available at www.ticketworld.com.ph.