REVIEW: Pamana, a docu-musical tribute to Ninoy and Cory Aquino 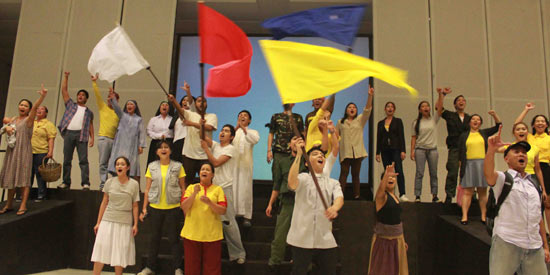 How do you tell a story that everyone already knows in a way that makes it fresh and relevant even today? Pamana achieves just that.

Pamana is about three generations of a family: Lola Azon (Malou de Guzman), her son Edgar (Jett Pangan), and granddaughter Trina (Kakki Teodoro) who went through highs and lows in a fight for democracy.

Instead of a reenactment of Ninoy and Cory’s life and times, Pamana shows how Ninoy and Cory touched the lives of a simple Filipino family.

The play opens with Ninoy’s funeral as seen through the eyes of a lowly metro aide named Lola Azon. Although the events happen at different times, Ninoy’s funeral is juxtaposed with Cory’s funeral in the same scene and told from the perspective of Lola Azon’s granddaughter, Trina. At first, both Lola Azon and Trina barely grasp the situation. However, the events light a spark of hope within them.

Edgar, however, is disillusioned. He has seen how the hard-fought democracy gradually disintegrated into corruption. He decides to work abroad as an OFW to give his family a better future. After a long separation, he returns to take his family with him to Switzerland. Trina is torn between her father’s skepticism and her faith that there is still hope for the Philippines.

The play traces the family’s experiences from Martial Law and EDSA revolution, to Cory’s death, to the administration of Joseph "Erap" Estrada. The family also learns about corruption in the government and becomes affected by the unemployment situation in the country.


Through music, theater and images, the play Pamana puts history and democracy in the context of our present situation. Has anything changed since People Power? Should we persist to hope or succumb to apathy?

Playwright Rody Vera manages to cover so much ground in a relatively short play. The play seamlessly alternates between Ninoy and Cory’s story, and the family’s story. It is commendable how the play raises questions instead of offering trite answers.

The leads are perfect for their roles. Their acting and musical abilities are nearly flawless. Malou de Guzman’s Lola Azon is poignant and unfailingly hopeful. She injects light-hearted moments in between the play’s serious themes. Jett Pangan as Edgar is indifferent and yet human. Even though his character is apathetic to the country’s situation, you understand why he has become that way. Kakki Teodoro as Trina is believable as a daughter faced with a difficult decision. Bodjie Pascua has a supporting role as Turo, Lola Azon’s husband. As Turo, he embodies the conflict between hope and hopelessness, fighting for change versus turning a blind eye.

The use of video documentary complements the music and theater and takes the play to a whole new level. Video director Jun Reyes does a commendable job. The documentary footage of EDSA People Power projected on oversized screens intensifies the revolution that is being recreated on stage. The news reels and sound bites remind the audience that this really happened. It makes the action on stage even more realistic. Video is also used to show Trina’s communication with her father through Facebook, Skype, Twitter, etc. The contrast between the black-and-white documentary footage and the social media further highlight the differences between the past and the present social climate.

Maribel Legarda’s staging is dynamic especially in the big crowd scenes. You can feel the energy of the ensemble in the protest marches and musical numbers.

All in all, Pamana succeeds in bringing history to life and making the struggles of the past relevant to our country’s present situation.