"Fiddler on the Roof" opens at Greenbelt 1 on November 9 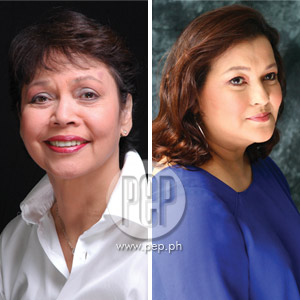 Joy Virata (left) and Pinky Marquez (right) alternately play Golde, the wife of Tevye, the happy milkman. Repertory Philippines's Fiddler on the Roof tells the story of a man who attempts to maintain his family and religious traditions while the world and civilization around him change rapidly.

To celebrate its 40th year, Repertory Philippines is restaging the most beloved of its musicals, Fiddler on the Roof, at the Onstage Theater in Greenbelt 1, Makati City.

When asked why REP is staging it again, director Baby Barredo said: "It will be nostalgia for many REP subscribers and there is a whole generation that hasn't seen this musical theater classic. Also, the message that it sends is as relevant today as it was thirty years ago. Besides, the music is some of the most memorable written for the stage and deserves to be heard again—sung, live, by the warm and funny characters of the story. Apparently both Broadway and West End feel the same way because it has been revived over and over—in fact, it is showing now in both places."

REP will introduce Tyler Allan Strand who appears as Tevye—the happy milkman and father of five daughters—who sings the popular "If I Were A Rich Man." Miguel Faustmann, one of Manila's finest actors, alternates with him. Golde, his wife, will be played alternately by Joy Virata and Pinky Marquez—both seasoned musical theater actresses. Other roles will be played by promising young theater actors—Niccolo Manahan, Cris Villonco, Vanessa Paolelli, Cara Barredo, Felix Rivera and Hans Eckstein.

An exciting new talent, Siria Rutstein, makes her first appearance in Manila—alternating with Samantha Sewell in the role of Tzeitel, the eldest daughter. They will be supported by a strong cast of REP actors including Enchang Kaimo, Bonggoy Manahan, Oliver Usison, and Boyd Tinio. Violinist Farida Kabayao makes an appearance as The Fiddler. Baby Barredo and Robbie Guevara co-direct and Julie Borromeo choreographs the show. The music will be played by the Manila Symphony Orchestra under the baton of Maestro Toti Molina.

Fiddler on the Roof, written by Joseph Stein with lyrics by Sheldon Harnick and music by Jerry Bock, is a story set in tzarist Russia. It tells the woes of a poor milkman faced with the problem of marrying off five daughters. Both funny and sad, as life usually is, the story is told with the help of beautiful songs that include "Sabbath Prayer," "Sunrise, Sunset," "Tradition," "Far From the Home I Love," "To Life L'Chaim," "Do You Love Me," and the haunting "Anatevka."

Fiddler on the Roof is definitely family-friendly and opens on Friday, November 9. For ticket information, prices, and show dates call 8870710 or visit http://www.repertory-philippines.com/