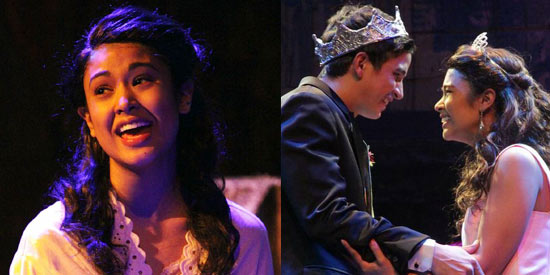 "Carrie, based on the modern classic by Stephen King, with music by Academy Award Winner Michael Gore, Lyrics by Academy Award winner Dean Pitchford and a Book by Lawrence D. Cohen (who wrote the screenplay of the Brian de Palma film), tells the tragic story of a misunderstood high school teenager named Carrie White with extraordinary telekinetic powers. Terrorized by her oppressive religious fanatic mother and bullied by her classmates, Carrie’s violent rampage of revenge remains one of the most terrifying stories of all time.

"Carrie first premiered on Broadway 25 years ago and, after numerous revisions, was recently revived at the MCC Theatre Off-Broadway. Carrie’s Book Writer Lawrence D. Cohen was the guest of honor on opening night and was thrilled with the show.

"K-La Rivera, who made her professional stage debut with Atlantis Productions two years ago in In the Heights, has assumed the role of Carrie, which she had to learn in only 6 days after the original actress had to withdraw from the production due to illness.

"Bobby Garcia, who directs Carrie and marks 20 years of directing this year, says, “It has been a dream come true directing Carrie. It is a musical that I have been a fan of for 25 years. I have been working closely with the writers of the musical who have been so generous and supportive of our production. It is a beautifully tragic retelling of the Cinderella story with an amazing Broadway pop score. We have assembled a fantastic cast and K-La Rivera delivers a phenomenal, once in a lifetime performance that you have to see to believe.”

"Carrie continues Atlantis Productions’ 14th season which opened with a hit production of Pam Gems’ PIAF starring Pinky Amador, followed by a repeat run of Rock of Ages, and will conclude with the family Broadway musical The Addams Family, which will star Eula Valdez, Arnel Ignacio and K-La Rivera.