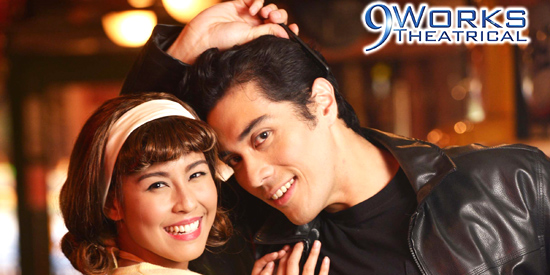 The classic Broadway musical Grease, also made popular by its 1978 film adaptation, will be staged in Manila by 9 Works Theatrical from November 9 to December 1, 2013, at the RCBC Plaza, Makati City. Grease will star Gian Magdangal as Danny Zuko, the handsome leader of the hunky T-Birds. Meanwhile, Francheska Farr debuts in Philippine theater as the sweet and innocent Sandy Dumbrowski.

The hit 1970s musical Grease, also an iconic film of its decade, will be staged in Manila by 9 Works Theatrical from November 9 to December 1, 2013.

Braving the many times Grease was staged for the last 40 years, including Broadway and West End, the Manila production is decided on giving today’s generation a taste of the late ‘50s post-war lives of the middle class youth.

Characterized by slicked back hair of the men, the greasy fast food, leather jackets, and pedal pushers, Grease tells the story of teenage rebellion, young love, growing up, and finding one’s place under the sun.

Known for its classic hits “Summer Nights,” “You’re The One That I Want,” and “Hopelessly Devoted to You,” Jim Jacobs and Warren Casey’s Grease is remarkable for how it changed musicals. From Rodgers and Hammerstein’s Sound of Music, Cinderella, also The King and I, Jacobs and Casey brought in early rock and roll, sexual revolution, and rebellious juvenile themes on stage.

Now the Manila audience will soon have its turn to see a local production of Grease.

Aiming to recreate and remind a generation dependent on social media and gadgets for recreation that “fun can be had in simple ways,” Grease director Robbie Guevara promises glamorous costumes, set design, and dazzling musical numbers.

He cannot change how Grease was spectacularly staged before this, but Guevara says this particular production will stay true to the musical’s core theme—a youth “wanting to break out of the box” after the dismal war took “fun” away from their lives.

CAST. The vibrant, talented, and youthful cast will be led by Gian Magdangal, who will play Danny Zuko, the handsome and easy-going leader of the T-Birds; and GMA-7 talent Francheska Farr, who will debut in theater as Sandy Dubrowski, the sweet and innocent recruit of the perky Pink Ladies. In the film version of Grease, Danny was played by John Travolta and Sandy, portrayed by Olivia Newton John.

A roundup of theater talents complete the T-Birds and the Pink Ladies: Reb Atadero (as Roger), Mark Tayag (as Sonny), Vince Lim (as Doody), Peachy Atilano (as Frenchie), also Sarah Facuri (as Jan).

SURPRISE GUEST. The role of the Teen Angel, a character of the musical who serenades Frenchie in the musical number “Beauty School Dropout” will be played by a surprise guest, each time different for a specific show.

Catch Grease all weekends from November 9 to December 1, 2013 at the Carlos P. Romulo Auditorium at the RCBC Plaza, Makati City. Grease will have a Friday, Saturday, and Sunday gala screening at 8 PM, Saturday matinees at 3:30 PM and Sunday matinees at 4 PM.