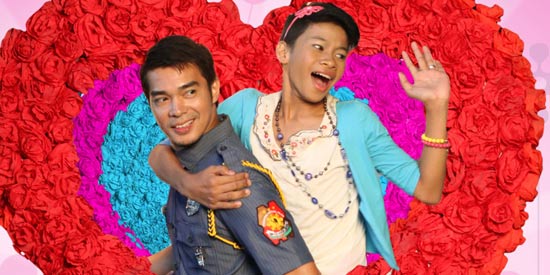 Maxie the Musicale: Ang Pagdadalaga ni Maximo Oliveros will be staged from November 9 to December 8, 2013 at the PETA Theater Center. Tickets are available through Ticketworld (Tel. No. 891-9999) or purchase tickets online.

In 2005, moviegoers were charmed by an effeminate boy, the lead character in the indie film Ang Pagdadalaga ni Maximo Oliveros. This 2013, theatergoers have the chance to fall in love with him all over again through Maxie the Musicale.


This coming-of-age musical is about a gay teen who is torn between his love for a young cop and his loyalty to his family. Teen actor Jayvhot Galang brings life to Maxie while Jojo Riguerra portrays Victor, the police officer who is the object of Maxie's affection.


Last August, a teaser called Patikim ng Shlight was held at the Cultural Center of the Philippines.


(READ: Meet the thespians behind Maxie the Musicale)


Yesterday, October 17, Maxie the Musicale was officially launched at Bed Manila, The Portal in the Greenfield District. The said play will be staged from November 9 to December 8, 2013 at the PETA Theater Center.

The special press conference featured four powerful numbers by the cast and an extensive Q&A with the cast, creatives and producers.


Darwin points out how and why Maxie the Musicale can appeal to younger audiences, especially those unfamiliar with the original Ang Pagdadalaga ni Maximo Oliveros movie version.


He says, "yung kuwento of a young person coming of age, learning and being made aware, na nababago yung paningin mo, nawawala yung mga mula pagkabata mo... nagdadalaga or nagbibinata ka, that's always timeless for any story. That's the beauty of this production."


Palanca award-winner Nick Pichay, who wrote the book and lyrics for Maxie the Musicale, is also quick to point out what differentiates this from the movie.


"Kasi kung movie siya, parang feeling namin, sasabihin lang ng audience, 'bakit kami pupunta diyan, e, mapapanood naman pala namin sa DVD.' So we added some other stuff which is not in the movie. But if you look at it, it really looks like the movie."


What he stresses is, "kung ano nagustuhan natin sa Maximo, andoon pa rin siya, pero if you let artists, musicians, choreographers work on a thing, on an adaptation, they will put in their insights, stuff like that."


Dexter M. Santos, the musicale's director and choreographer, expounds that it was a constant process of change and brainstorming. "As much as possible, 'yan yung challenge namin: bakit kami pupunta sa theater kung makikita rin namin yun pelikula? We always go back to our drawing board. We collaborate with our musicians, will this number work, or masyado na ba etong lumilihis. Or is this still with the aesthetics na gusto namin?"


Nick also points out that while Maxie is an effeminate boy, it's not just that, because "as you know, it takes a community to raise a child. Maxie is about raising Maxie, and also about the community, and the community is us."


He adds, "see how Maxie dovetails into all our problems with you know... And it's all highlighted by these songs about our memories of our little Sampalocs in our lives, the radio stations that we say ang baduy, but in secret, we love singing them. Whether of any gender orientation, you will find your song. Because Maxie is singing the song of Sampaloc and it is singing our songs for today."


Maxie the Musicale will run November 9 to December 8, 2013 at the PETA Theater Center in Quezon City.


Dexter M. Santos explains how this production can appeal to those used to seeing mainstream offerings at this time.


"What's important is the medium: theater. It's exciting because what you love in the film is gonna be there, it could be a production number, a ballad...like Maxie's solo on yung profession niya of love for Victor, in the film, we used camera for close-ups to capture that feeling. But here, we translated that into a song number."


"I think we have to be very conscious on using the power of the theater, that it is alive, it is there for us to actually experience, it's gonna be a musical, so a lot of dancing, a lot of songs. And also, yung hinahanap natin dito, yung kurot ng puso, a coming-of-age film..." Dexter says it's all there plus more.


Nick Pichay puts it succinctly, "come to Maxie because of the songs, the musical arrangement is [gestures with amazement], and the musical choreography and direction. And you come because the cast worked very hard. Come to the theater because it is live, it is alive."


Because this is theater, should audiences also expect something surprising from the lead thespians, something that the ratings system would not have allowed on film previously?


Of the original five filmmakers, Emman dela Cruz was the only one able to attend the press conference. He shared how all five have seen and heard material coming from Maxie the Musicale. He expressed his heartfelt thanks, "salamat, nagkataon ako lang ang representative ng original filmmakers today."


He recalls the CCP Patikim ng Shlight, "I remember being in your first preview, and then finally seeing it today, being sung by the actual cast...this was really overwhelming."


He says that he and the other filmmakers felt very comfortable turning over Maximo Oliveros to Bit by Bit Company because, "we completely entrusted our film to them kasi pakiramdam namin, we chose the right group. Nakangiti kaming lahat. Nakikita ko ngayon sa kumpletong cast."


He says that the strength of Maximo Oliveros stemmed from a unity of voices, with no attempts at trying to outshine each other, and that he and the other filmmakers were there for Michiko Yamamoto's screenplay, "from the very start, andoon kami para magkaroon ng legs ang movie, pangalan pa niya dati, Batang Bakla."


Since all five filmmakers were connected to Star Cinema, they felt that the movie needed to be produced elsewhere, and that same feeling he says, "we felt it had to be born out of a different kind of womb and that is what I see in you guys, the pressure is really on, but I can see that you are creating it with your own voices, marrying it to each other and it is becoming a communal effort. It's a community also that built the film. This film was made for the Filipino people, that's the magic, and that is what I first heard with your collective voices today."


Emman encouraged the people behind Maxie the Musicale, "I would say na nagawa niyo, na nacreate niyo yung same spirit that we were, that we had and I feel so happy today on behalf of the other filmmakers."


Tickets are available through Ticketworld (Tel. No. 891-9999) or purchase tickets online.