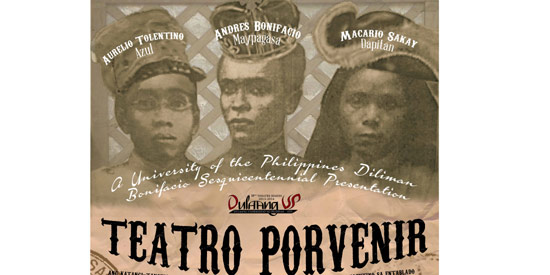 Teatro Porvenir, a re-imagining of the history of the Katipunan, will be staged at the Palma Hall, University of the Philippines Diliman starting November 20.


PRESS STATEMENT FROM DULAANG UP:

"In celebration of Andres Bonifacio’s sesquicentennial, Dulaang UP stages Teatro Porvenir, Ang Katangi-tanging Kasaysayan ni Andres Bonifacio, Macario Sakay at Aurelio Tolentino sa Entablado, a Palanca-winning play written by Tim Dacanay. Teatro Porvenir is a re-imagining of the history of the Katipunan through an amalgamation of myth and literature, history and religion. The play highlights Bonifacio as artist—a facet of this valiant revolutionary that remains largely unknown to most people.

"It all starts with a struggling moro-moro troupe in Tondo, Teatro Porvenir (Theater of Tomorrow). Its members—Aurelio Tolentino, Emilio Jacinto, Macario Sakay and the brothers Ciriaco, Procopio and Andres Bonifacio—try to introduce reforms in the komedya and senakulo. Born into a time of foment, their art-making is informed by the subversive works of Jose Rizal and Marcelo del Pilar. The moro-moro players ultimately become members of the supreme council of the Katipunan and play out their vital roles in Philippine history.

"Culled from a diverse array of historical scholarship and documents, religious and literary traditions such as the sinakulo, komedya, awit, and pasyon, this highly imagist play seeks to bring to the 21st century a new interpretation of the life and times of Andres Bonifacio.