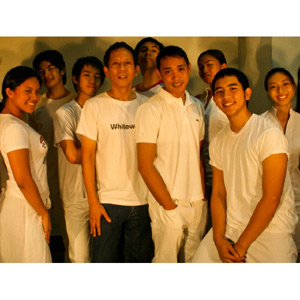 Cast members of Tanghalang Ateneo present the Philippine premiere production of The Death of Memory. The second offering of the company's 29th season will be staged November 29 to December 15.

In the play, four people are trapped in a nowhere land where time has stopped. They have no memory of how they got there and no idea on how to get out. Each one carries a painful and violent memory—sexual abuse, abandonment, murder—that assaults them at unpredictable moments and ties them to this purgatorial prison.

A Keeper holds them in this limbo. At one point, the newly arrived man, Juan, incites his fellow prisoners to defy the Keeper and escape from memory. Will they be able to free themselves? But how? This intense and imaginative play examines the strength of the human will to live and choose, to fight against paralyzing pasts, and to move on.

Ralph Quiblat and Brian Sy alternate as the newcomer, Juan, while Rachel Quong and Margarita Paje play the Keeper, the ethereal guardian of the nowhere land. The rest of the faculty cast are Randy Solis, Dianne Laserna, Miguel Lizada, and Angela Serrano. The student cast is composed of BJ Crisostomo, Regina Francisco, Nicolo Magno, and Gianna Villavicencio.