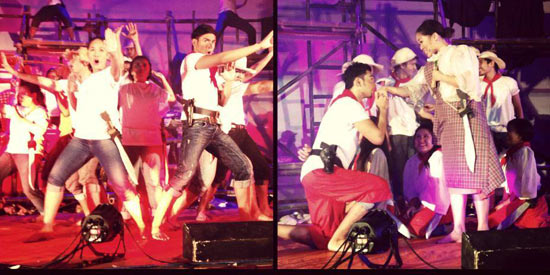 
"Thrilled were the people who watched the musical described as 'Andres Bonifacio in steroids,' by blogger Michael King Urieta.


“Superb performances by the actors with a great story line,” said Ms. Harcee R. Sarmiento, a high school principal from Dagupan. “Anna Fegi’s voice captivated our hearts and it was well matched by the performances and vocal styling of Sandino Martin and RJ Jimenez. Lamangan and Pablo's directorship was excellent. The ensemble was so energetic and they seem to possess a good kind of fierceness.”


"Mhel Patrick Lomibao of CCNHS shared. “After watching the production, I have become one of Gantimpala Theater’s biggest fans. Thank you for giving us an unforgettable musical. You did an excellent job—the actors, songs, dances and the fast-paced story made me appreciate more the struggles of Andres Bonifacio.”


“Frankly, I thought it will bore me but when the musical started, Lupang Hinirang pa lang, I was hooked. I had goose bumps all through out the show. When the whole cast sang Pilipinas Kong Mahal, I was in tears,” averred Mayette Lopez Durante.


"Alessandra Serrano, a student viewer declared, “Andres Bonifacio was so amazing, what a powerful voice. Sandino Martin was superb, and the rest of the cast as well.”


"Ysrael Mesa enthused, “Katipunan was a very special play because you really see and feel the commitment and passion of the cast when they perform. They were all heart. The musical stirred something in me and I know that those who will watch it, something in you will be stirred as well.”


"The Katipunan artists are in rapture as they shared their tales.


"Anna Fegi, as Oryang verbalized, “It’s so exciting to be a part of this living musical production. It is a good professional experience. I share the stage with such a talented, young actor, Sandino Martin. I get to sing 'Puso Ko’y Lumilipad,' RJ Jimenez composed the music with lyrics by Jose Jeffrey Camañag. I get to float across the stage in love.”


“When I saw the Katipuneros dying one by one, it came to a point when all the voices shouted ‘Kalayaan!’ and the of singing ‘Sugod Mga Kapatid!’ were diminished to a trio of Emilio Jacinto, Gregoria De Jesus and Andres Bonifacio, a beautiful and eye opening moment happened, this when Sandino Martin took a deep breath and suspended it, and altogether, I saw his knees weakened, shoulders drooped, the gripped in his bolo loosened and I was sure that at this point a howl of defeat will be heard, the moment he releases the breath that he is struggling to suspend, to my surprise his gripped tightened, took a courageous fighting stand and simultaneously raised his bolo as he sang his last word Sugod!!!!’ Bravo Sandino!” exclaimed librettist Jose Jeffrey Camañag.


"In full support of Katipunan are the National Parks Development Committee (NPDC), ACES and PROS, Skin Sanctuary and Everbilena.