THEATER REVIEW: Grease lives up to its promise of reviving effervescent era of the '50s 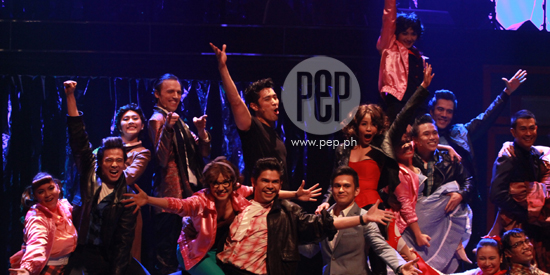 Theater group 9 Works Theatrical decided to give this generation a dose of the '50s with a restaging of the iconic musical Grease.

Leading the cast of Grease The Musical are two GMA Network talents: Gian Magdangal as Danny Zuko, charming leader of the T-Birds and Frencheska Farr as the sweet naïve girl Sandy Dumbrowksi.

THE CAST. One of the strengths of 9 Works Theatrical’s restaging of Grease is its choice of cast members.


As a stage veteran, acting and singing is not a problem for Gian Magdangal but displaying the energy of his teenage character, Danny Zuko, is what challenged him the most.


Still, Gian successfully maintained his high energy throughout the musical by channeling his inner John Travolta. It will be recalled that John played the lead character in the 1978 American musical film Grease.

Frencheska wowed the audience with her powerful vocals in addition to her impressive acting skills. The Kapuso actress did extensive research on her character, which was portrayed by Olivia Newton-John in the Hollywood film.


The Pinay lead actress even asked co-star Jennifer Blair-Blanco to record her voice during rehearsals so she could assess herself when she's practicing alone.


During the press preview, Frencheska admitted that she’s not really good in speaking English but during her performance, the singer delivered her lines well.

Iya Villania’s portrayal of bad girl Betty Rizzo is also impressive. Iya stood out for her powerful performance of “Worse Things” although you can still hear a bit of her Australian accent.

Rafa Siguion-Reyna might be a theater newbie but he played to his strengths in his portrayal of Kenickie. Rafa may not be the best singer of the group but his dancing skills and killer charm compensates for what he lacks on stage.

The supporting cast members were given their moments to shine in this musical.


Reb Atadero (who plays Roger) left an indelible mark with his performance of “Mooning.” It can definitely be considered as one of the most memorable moments of the musical.

Reb’s partner, Sarah Facuri, did not end up fading on the background because of her great comedic timing. It's hard not to laugh at her antics, especially when her character Jan eagerly wolfs down food on stage. Watching her on stage reminds me of Hollywood star Rebel Wilson’s effortless comedic delivery in Pitch Perfect.

Also, surprise guest actors will be tapped to play the teen angel in the "Beauty School Dropout" scene.


My Husband's Lover star Tom Rodriguez and thespian Franco Laurel were among those who were tapped to play this role.

'50s VIBE. I personally think that the stage of Carlos P. Romulo Auditorium of RCBC Plaza in Makati City is a bit small for a musical with this kind of scope.

However, set designer Mio Infante successfully maximized the space allotted to them. The set basically looked like a huge '50s-inspired jukebox. There is a second level where members of the orchestra were positioned, freing the stage for actors.

In line with the '50s vibe, the men had their hair slicked back and they are often seen wearing leather jackets. As for the women, colorful dresses, high-waisted pants, bobby socks, and pedal pushers completed the retro look.

Robbie Guevarra did a great job of directing the musical. The Manila run of Grease is a must-watch for its energetic song numbers as well as great acting moments of the cast. This is a pleasant surprise considering that there were newbies who had the huge responsibility of bringing life to major moments of the musical.

Some of the best moments of the musical are the renditions of the songs "Greased Lightning" and "You're The One That I Want."


Prepare to interact with the cast towards the end of "We Got Together" since the director decided to make audience participation as a regular feature of the musical.

Grease will be shown until December 1, 2013 at the Carlos P. Romulo Auditorium at the RCBC Plaza, Makati City.