CCP intends to launch book about Cinemalaya; aims to restore Manila as hub of arts and culture 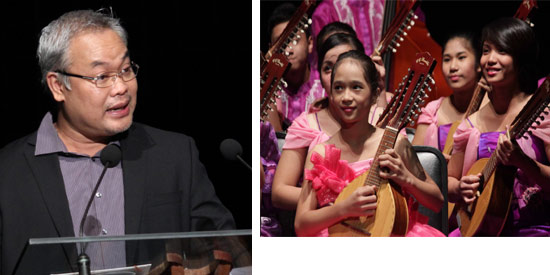 Artistic director Chris Millado (left) disclosed the plays and concerts to be mounted at the Cultural Center of the Philippines this 2014. According to Millado, the vision of the CCP is to make art matter in the life of every Filipino.

The Cultural Center of the Philippines proudly presents its upcoming programs, festivals, exhibits, shows, workshops and productions this 2014.

Chris Millado, CCP artistic director, detailed the events that Filipinos interested in arts and culture can expect from the leader in the creation of original Philippine content in dance, theater, music, literature, visual arts and film.

According to Millado, the vision of the CCP is to make art matter in the life of every Filipino.

He explains the three goals of the Cultural Center of the Philippines this 2014: become the center of music, theatre performance and production in the Asian region; intensify participation in poverty alleviation, the fight against corruption as well as disaster relief and rehabilitation through the arts; and stimulate the creative industry by consolidating the efforts of the performing arts sector.

Since the CCP’s establishment in 1966, Millado describes CCP as having nurtured and developed artists who have become masters in their field.

Here is the rundown of major festivals and events that will take place at the CCP this 2014:

The Pasinaya Open House Festival is the largest mobile art festival in the country. The Pasinaya Festival is open to the public for free and has attracted more than forty thousand audiences and performers in a single day.

2014 will see the festival take place for two days this March 2014 at various venues in Ermita, Malate and Intramuros. Millado describes CCP’s need for an army of stage managers, stagehands, ushers and volunteers for this event.

Though free, the Pasinaya will implement a “Pay What You Can” policy. Art jeepneys will be mobilized to ferry audiences and artists around the Pasinaya circuit with the help of Carlos Celdran, the City Tourism Office of Manila and the Philippine Tour Organizers Association.

The CCP artistic director envisions Roxas Boulevard’s transformation to become an art and culture mile. The move to make the festival city-wide anticipates the country’s hosting of the APEC Summit in 2015.

Through Pasinaya, Millado expresses CCP’s hope to restore Manila as the hub of arts and culture in the country. Also working on the project is the City Government of Manila, Pasay, the Department of Tourism and the Intramuros Administration.

Cinemalaya, considered as the largest and most influential independent film festival in the country, will celebrate its 10th year this 2014. More cinemas will be added in the metropolitan areas and a book illustrating the history of the festival will be seen.

The Orchestra and Symphonic Band Festival

Previously, the Orchestra and Symphonic Band Festival were two different events. This 2014, the CCP will merge the two festivals. Expect large ensembles composed of thirty to fifty members each.

The Next Generation Arts Festival

This new festival will be a week-long showcase of performances that will cater to children, youth and their families.

The Flutopia Festival aims to raise public awareness as well as appreciation for flute music. The event will showcase the flute and all related products and services through workshops and trade fairs.

Kwerdas ng Pagkakaisa: The Philippine Rondalla Festival will take place on February 2014 in time for the CCP Arts Month. After which, the National Rondalla Clinic will bring twenty Rondallas from all over the Philippines for Rondalla intensives at the CCP.

Now on its 7th year this 2014, the WiFi Body Contemporary Dance Festival will gather contemporary dance artists in showcase competition & forums on new innovative & contemporary dance works. The festival has served as a magnet for interdisciplinary collaboration with artists of other disciplines as well as with dancers & choreographers of contemporary dance.

Musicals to watch out for at the CCP include:

Rivalry: Ateneo La Salle the Musical is an original Filipino musical that is about rivalries between friends, cousins, parents and the Ateneo and La Salle basketball teams. It won the Aliw Award for Best Musical Direction for Ed Gatchalian as well as Best Stage Direction for Jaime del Mundo.

Rivalry won Broadway World’s Best Music Award for an Original Filipino Musical. It will be staged at the CCP starting January at the CCP.

Lorenzo the Musical is a rock opera by Ryan Cayabyab that will premiere at the CCP. In the play, Lorenzo is an Overseas Filipino Worker awaiting execution in the Middle East. While in prison, he creates a theater production based on the life of the first Filipino saint Lorenzo Ruiz.

Noli Me Tangere, The Concert is composed and created by Ryan Cayabyab with Bien Lumbera. It will run at the CCP Main Theatre this 2014.

From January to the first week of March, Wicked—the untold story about the witches of Oz—will run at the CCP Main Theater. Presented by Lunch Box Theatrical Productions, Wicked will donate proceeds of one of their performances to the relief and rehabilitation of communities affected by Typhoon Yolanda.

(Read: Get a sneak peek of Wicked stage design)

Red, a critically acclaimed production by the Necessary Theatre of Actors Actors Inc., will run at the Tanghalang Huseng Batute Studio Theatre.

This play is about abstract expressionist painter Mark Rothko. He was commissioned to paint a series of murals for a building in Park Avenue. After the project’s completion, he keeps all the paintings and gives back every penny of the commission’s advance. He then donates the works to the Tate Gallery in London and commits suicide on the day it arrives in the gallery. The play introduces a fictitious assistant who engages Rothko in conversations and arguments that make the audience understand why he withdrew his works.

Here are the projects prepared by CCP’s resident companies:

Tanghalang Pilipino will be presenting Kleptomaniacs, a new rap musical about thieves; Nick Joaquin’s Mga Ama, Mga Anak that will be directed by Joel Lamangan; and Arthur Miller’s Pahimakas Sa Isang Ahente, Rolando Tinio’s translation of Death of a Salesman.

The Philippine Madrigal Singers will do five concerts this 2014. Their always-sold-out concerts will take place at the CCP Main Theater.

Meanwhile, the UST Symphony Orchestra will perform two concerts at the CCP Main Theatre this 2014.

Besides the concert series by the Philippine Philharmonic Orchestra, it will also launch new programs for the youth featuring songs from anime and video games.

The Philippine Philharmonic will also go to Mt. Makiling for a sunset concert on May 2014. The venue sets the perfect location for a panoramic view of Laguna Lake and the shoreline towns.

Ballet Philippines will re-stage Giselle in time for the 45th anniversary of Ballet Philippines as well as the CCP, both of which was founded at the same time. The gala show will see a reunion of artists who have worked with the company.

“Salvador Bernal Designs for the Stage” is a retrospective exhibit composed of scale model costume pieces, construction plans and sketches made by 2011 National Artist for Theater and Design awardee Badong Bernal. The exhibit will take more than twenty scale models of costumes, mannequins and valuable artifacts on a national tour to more than ten cities.

CCP’s 45th ANNIVERSARY. The Cultural Center of the Philippines will be celebrating its 45th year this 2014. The Center has started work on the Encyclopedia of Philippine Art: considered as the most comprehensive and trustworthy source on Philippine art and culture.

Top-notch experts from the academe, led by Dr. Nicanor Tiongson, have begun researching and updating thousands of entries for the twelve-volume encyclopedia. It is set to be released in digital form and hard copy to make the resource available to users online.

Another big project that is currently in development is the digital timeline where CCP has tapped the latest technologies to enhance the popularization and dissemination of Philippine art and culture.

OUTREACH AND EDUCATION. The current national calamities hounding the country pushed the CCP to anticipate the role of arts and culture in disaster relief and rehabilitation.

Donations are now being collected after each show and will continue until early next year. Donations amounting to P150,000 was raised this November to December by passing donation boxes after each show.

The CCP Arts Education Department developed modules in art therapy to aid in the rehabilitation process among children and their guardians affected by typhoons. The CCP team went to Tacloban to conduct workshops headed by Eva Salvador. Trauma experts, counselors as well as art and music experts will continue working with individuals in the affected areas.

The Center is similarly aware of its vulnerable location as it sits on the part of the bay where storm surges are a possibility. It has now strengthened its disaster preparedness modules using theater and improvisation to equip vulnerable communities with the same skills. Climate change education is also being disseminated.

CONSERVATORY PROGRAMS AND WORKSHOPS. Different master classes, workshops and conservatories will take place at the CCP this 2014.

The Launch New York Manila Musical Theater Workshop will see three leading experts in musical theater performance from New York coaching mid-career performers on the art and technique of singing, acting and dancing in a musical. This two-week intensive aims to develop triple threat performers who can sing, dance and act.

The Paris Manila Opera Conservatoire will also push through in 2014. In cooperation with Alliance Francaise and the Embassy of France, the conservatory will bring together mid-career opera singers for an intensive training with a French opera coach in the art of singing opera arias.

The CCP Chorale Institute will have a training program in the art of chorale singing and conducting to be mentored by members of the Philippine Madrigal Singers.

Sing Philippines will hold its first program where leading choir members will be selected from all over the country to form a dream chorale made of the best singers from their network of choirs. This hands-on choral workshop will bring beginners, intermediate conductors and choir members for an intensive on the techniques of conducting and choral performance.

INTERNATIONAL GUESTS AND PERFORMERS. In cooperation with the British Council, two exciting works are set to be staged at the CCP. These are devised works and solo monologues from the Edinburgh Fringe Festival.

Daniel Bye’s “The Price of Everything” is a lecture-monologue that asks questions such as: How much is beauty worth? What will people pay for an air guitar in eBay? Can I have a glass of milk?

This performance/lecture/stand-up/storytelling show about value has been described as “occasionally shambolic, misguided but always a joy to watch.” Bye trained with the Royal Shakespeare Company and his works has been seen in more than fifty venues across the UK.

James Cousin’s There We Have Been will also be presented at the CCP. Inspired by Haruki Murakami’s Norweigan Wood, the hero of the story starts a relationship with the bereaved girlfriend of his recently deceased best friend. The dance is a duet where the two performers are seen intimately entwined but the woman’s focus is rarely on the man. She reaches out into space but would fall if she is let go. For the whole duration of this lengthy and intense relationship drama, the female dancer literally never touches ground. The show is presented in cooperation with the British Council and the Philippine Educational Theater Association.

There are plans to mount pending titles from France and Spain.