Repertory Philippines presents plays for 2014; kicks off with thriller Wait Until Dark 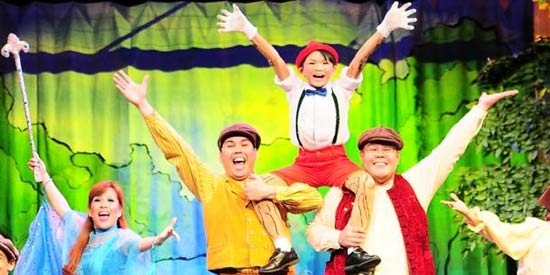 Repertory Philippines' Pinocchio will be staged from August 16 – December 12, 2014. Other plays lined up for 2014 include Wait Until Dark, August: Osage County, Noises Off, and Scrooge. (To purchase tickets of Repertory plays online through Ticketworld,

To celebrate its 47th year, Repertory Philippines unveiled its exciting line-up of shows for season 2014. The upcoming season includes a thriller, a black comedy, a farce, a children’s musical, and a family musical. Theater fans won’t be disappointed with the unique shows REP has in store this year.

Hosted by Reb Atadero and Arya Herrera, select members of the media were treated to an excerpt of Pinocchio, panel interviews, a memorable performance of “The Impossible Dream” by Carlo Orosa, as well as a stirring show choir rendition of “Sing a Christmas Carol” by REP’s Broadway Babies.

Here are the shows that theater lovers can look forward to this 2014:

Wait Until Dark is a suspense-thriller play written by Frederick Knott. It was adapted for film in 1967 and starred Audrey Hepburn.

When Sam Hendrix carries a doll across the Canada-U.S. border, he sets off a chain of events that will lead to a terrifying ordeal for his blind wife, Susy. The doll was stuffed with heroin, and its owner, Mr. Roat, will do anything to get it back. Mr. Roat arranges for Sam to be away from the house and sends two con men, Mike Talman and Mr. Carlito, to manipulate Susy into telling them where the doll is hidden. Susy has no idea where the doll might be, leading Mr. Roat to take a more violent approach in getting the information from her.

When asked about the challenges of playing someone blind, Liesl Batucan said, “Miguel [Faustmann] is the most fantastic, instinctive actor/director that you can ever have guide you…Each rehearsal is a discovery process for me.” She explained how she rehearsed blindfolded and even turned off all the lights in her house to feel what it would be like to be blind.

August: Osage County explores the painful issues all American families have to face, and then some. At the Oklahoma farmhouse of the Westons, the patriarch Beverly goes missing. After five days, his body is found in a lake, presumed to be a suicide. The play delves into the family’s pain and offers a peek into their dysfunctional lives. Violet, the drug-addicted matriarch, her three daughters, and their families unsuccessfully try to work out their issues as their relationships unravel.

Veteran actress Baby Barredo, who plays the matriarch Violet, said, “…Of all the roles that I’ve done, this would be the most difficult of all…She [Violet] is a complicated character…She is bipolar. She has cancer of the mouth…She becomes addicted to her drugs. Her energy, her physicality, her speech gets completely crazy.” Baby likes how everyone in the play has his/her own memorable moment on stage. She said, “I’m not the star of this play. The play is the star.”

Noises Off starts in the middle of the dress/technical rehearsal for a theater company tackling Nothing On, an English sex farce in which two couples cross paths at a country manor. The three acts of Noises Off feature the play-within-a-play, as well as the backstage drama and complicated love lives of the actors presenting the farce.

Actor Joel Trinidad is excited to be part of the cast. He said, “I’ve been a fan of the show ever since I first saw it...The movie version, which I’m also a fan of, is the funniest thing I have ever seen in my life. I’ve seen it like ten times.” Director Miguel Faustmann talked about Noises Off, “It’s really about us…about theater actors and theater people. It’s really hilarious especially for us because we know what it’s like back here.”

Set in Italy, this is the beloved tale of Pinocchio, a boy-sized puppet built by Geppetto, the puppet maker who has always longed for a son. The Blue Fairy brings Pinocchio to life and tells him that if he always obeys his father, she will turn him into a real boy. But the best-laid plans can sometimes go awry, and Pinocchio’s big dreams lead him away from his father and on an adventure unlike any other.

An excerpt of Pinocchio was shown during the media launch. Antonio (Arnel Carrion) sang the song “Buon Giorno” and invited the audience to sing along with him. The townspeople joined in the chorus. Gepetto (Oliver Usison) showed off his newly-made puppet Pinocchio (Guido Gatmaytan). Then, when everyone had gone, the Blue Fairy (Liesl Batucan) cut off Pinocchio’s strings and brought him to life.

The set looked like a picture from a story book. There was a backdrop of trees painted on canvas, a tree set piece, and two wooden benches. The costumes of the townspeople were composed of peasant skirts, billowing sleeves, and vests in vibrant green, yellow, and red. Pinocchio’s make-up made him look like a wooden puppet, and his robotic movements completed the illusion.

The songs were catchy and sounded like nursery rhymes. The cast members gave an admirable performace. The choreography was simple but neatly executed. The best part of the excerpt was when Pinocchio transformed—he loosened his limbs and danced like a real boy.

The musical Scrooge is based on Charles Dickens’ beloved classic, A Christmas Carol. On Christmas Eve, the stingy and cantankerous Ebenezer Scrooge is visited by the ghost of his former partner, Jacob Marley. Marley tells Scrooge that three spirits will visit him that night. The Ghosts of Christmas Past, Present and Future help Scrooge realize what his fate would be if he does not change. Scrooge is a timeless Christmas classic for people of all ages.

Director Baby Barredo says about the play, “Scrooge captures the spirit of Christmas. That Christmas is a time not of receiving but of giving. It’s a classic. Everyone knows the story of Scrooge.”

Tickets are available at the REP website www.repertoryphilippines.com or call Ticketworld at Tel. No. 891-9999.