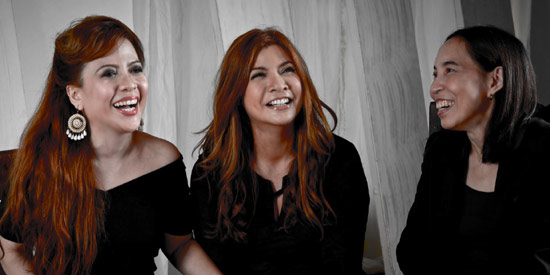 August: Osage County tells the dark, hilarious and deeply touching story of the strong-willed women of the Weston family, whose lives have diverged until a family crisis brings them back to the Midwest house they grew up in, and to the dysfunctional woman who raised them. Tickets are available through Ticketworld at Tel. No. 891-9999 or purchase tickets through

Repertory Philippines proudly announces its second offering for the Season 2014 with August: Osage County, the 2008 Pulitzer Prize for Drama written by Tracy Letts.

August: Osage County is set on the plains of modern day, middle-class Oklahoma. The Weston family members are all intelligent, sensitive creatures who have the uncanny ability of making each other absolutely miserable. When the patriarch of the household mysteriously vanishes, members of the Weston clan gather together to simultaneously support and attack one another.

Written with a strong sense of humor, August: Osage County follows the meltdown of the Weston family as each member has personal difficulties that s/he is unable to resolve.

Chris Millado, a well-respected theater veteran and currently the Vice-President and Artistic Director of the Cultural Center of the Philippines, will direct August: Osage County.

The cast of August: Osage County and the characters they portray are as follows:

BABY BARREDO shall play the role of Violet Weston, the central character of the play and tracks her life across the month of August while she lives in Oklahoma. The devious matriarch, Violet is addicted to painkillers (and any other pill she can pop) including alcohol and is beyond the glory of her life when she was a famous poet. She suffers from cancer of the mouth. But that doesn’t stop her from spewing her cynicism or her hilariously sinister insults. She has also lost Beverly, her husband.

PINKY AMADOR plays the role of Barbara Fordham, the eldest daughter. In many ways, Barbara is the strongest and most sympathetic character. Throughout the play, she tries to gain control of her chaotic mother, her dilapidated marriage, and her pot-smoking 14-year-old daughter.

TAMI MONSOD plays the role of Ivy Weston, the middle daughter. A quiet librarian, and stereotypically mousy. Ivy has stayed close to home, unlike the other errant Weston sisters. This means Ivy has had to endure the acid tongue of her mother. She has been maintaining a secret love affair with her first cousin.

LIESL BATUCAN plays the role of Karen Weston, the youngest daughter. She claims to have been unhappy her entire adult life, prompting her to move away from the family and reside in Florida. However, she returns to the Weston home bringing along a fiancé in tow–a successful 50-year-old businessman who, unbeknownst to Karen, turns out to by the most loathsome character within the play.

LEO RIALP plays the role of Beverly Weston, husband of Violet and father to his three 40-something daughters. He was a one-time world class poet and full-time alcoholic. He’s polite, soulful, melancholy, and ultimately suicidal. 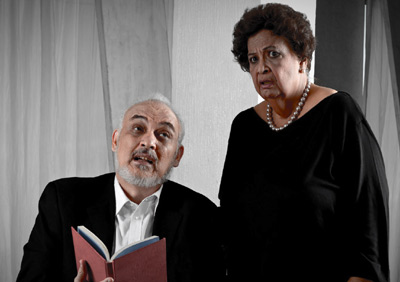 KENNETH MORALEDA plays the role of Bill Fordham, Barbara's estranged husband and Jean's father, age 49. A college professor, he has left his wife for a younger woman named Cindy, one of his students, but wants to be there for his family. His marriage is disintegrating and his patience is slowly running thin.

SHEILA FRANCISCO plays the role of Mattie Fae Aiken, Violet's sister, Charlie's wife and Little Charles' mother. Just as jaded as her sister, Mattie Fae constantly belittles her son and antagonizes her husband. Eventually she reveals the major plot point that Beverly, not Charlie, is the real father of Little Charles. Sheila is also the understudy for Violet Weston.

THEA GLORIA plays the role of Jean Fordham, Bill and Barbara's smart-tongued 14-year-old daughter. She smokes pot and cigarettes, is a vegetarian, loves old movies, and is bitter about her parents' split. More naive than she would like to believe.

RICHARD CUNANAN plays the role of Charlie Aiken, husband of Mattie Fae and the presumed father of Little Charles. Charlie, a genial man, was a lifelong friend of Beverly. He struggles to get Mattie Fae to respect Little Charles.

HANS ECKSTEIN plays the role of Steve Heidebrecht, Karen's fiancé. A businessman in Florida, (whose business, it is hinted, centers around the Middle East and may be less than legitimate) and not the "perfect man" that Karen considers him. He sexually molests Jean after the two smoke pot together.

NOEL RAYOS plays the role of "Little" Charles Aiken, son of Mattie Fae and Beverly, 37 years old—but, like everyone else, he believes Charlie is his father. Unemployed and clumsy, his mother calls him a "screw-up", which may be a self-fulfilling prophecy. He is secretly having an affair with Ivy, who is revealed to actually be his half-sister.

ANGELI BAYANI plays the role of Johnna Monevata, a Cheyenne Indian woman, whom Beverly hires as a live-in housekeeper shortly before he disappears. Violet is prejudiced against her, but she wins over the other family members with her cooking skills, hard work, and empathy. Johnna is the silent witness to much of the mayhem in the house.

NATHS EVERETT will understudy the role of Johnna Monevata.

ARNEL CARRION plays the role of Sheriff Deon Gilbeau, a high-school classmate and former boyfriend of Barbara's, who brings the news of Beverly's suicide to the family.

Most specially, it was also in 2008 when the play received the biggest award in the industry, the Pulitzer Prize for Drama and the TONY Award for Best Play.