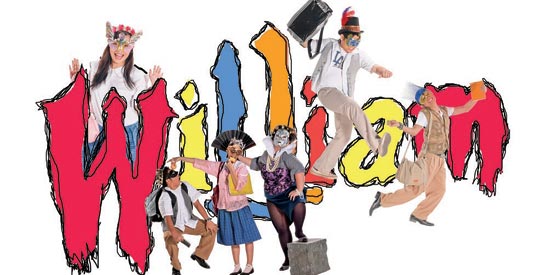 What could be more interesting than introducing William Shakespeare through rap rhythm and hip-hop beats?

As the Philippine Educational Theater Association’s William raps back on stage, this time at the Star Theater in Pasay City, it will never stop to teach the youth how Shakespeare shaped the world of theater and the arts.

As much as these students are part of different cliques, all of them struggle to understand Shakespeare and his works – some find his poetry difficult to understand, others are simply bored with the subject and most simply don’t find meaning in studying Shakespeare.

Punished due to their “insolence to Shakespeare,” they are required by their teacher to present a scene of a Shakespearean play, which allows them to rediscover how Shakespeare characters and stories are parallel to their life situations.

Since it was first staged in 2010, PETA’s rap musical William has managed to capture the interest of students and local theatergoers, even earning nods from a British news agency.

PETA’s 2014 offering will bring William to the dazzling Star Theater in Pasay City to introduce the Bard to more viewers.

William Shakespeare, the brilliant bard from Stratford on Avon may no longer be relevant to many young people, but a rap musical about teenagers being forced to learn about him has given him a new life.

A video report by Marek Pruszewics of BBC News described the play as a “modern twist on Shakespeare” that “aims to help young people understand the playwright.”

Reminiscent of today’s popular TV musicals such as Glee and High School Musical, William is set in a high school in Metro Manila, where five young students are forced to study Shakespeare by their terror class adviser, Ms. Lutgarda Martinez.

In the process of studying, these students not only realize the beauty of Shakespeare’s works but also re-discover themselves through Shakespeare’s characters.

The musical written by Ron Capinding touches on themes of adolescence, parents’ unconditional love and friendship and promotes respect for teachers and classmates, and advocates love for reading and appreciating literature—Shakespeare or not.