Repertory Philippines' "Fiddler on the Roof" celebrates tradition and change 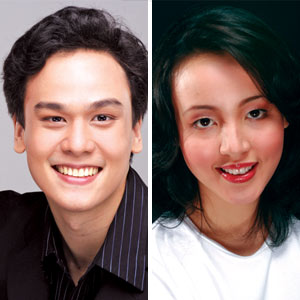 Niccolo Manahan (left) and Cris Villongco (right) are part of Repertory Philippines' Fiddler on the Roof. They play the characters Motel and Hodel, respectively, in this production that will run until December 16 at Greenbelt 1, Makati City.


Repertory Philippines celebrates its 40th year with a restaging of theater goers' beloved classic, Fiddler on the Roof. First performed by Repertory Philippines (REP to its aficionados) in 1983, this theater classic focuses on the story of milkman Tevye and his Jewish village in pre-revolutionary Russia.


The story is oddly more relevant to the lower-class Pinoy than it is to the upper-class bourgeois. The main character is Tevye, the happy-but-poor-as-a-synagogue-mouse milkman who manages to keep a wry sense of humor about himself, his family, and his God. The plot revolves around the familial, social, and political changes that affect him and his family in the little kosher village of Anatevka circa 1905.


Try as he might, "Papa" Tevye and his Jewish fellowmen try to stick to tradition, because "Without tradition, our lives would be as shaky as a fiddler on the roof." But in the course of marrying off three of his five traditionally brought-up daughters, he begins to realize that maybe tradition will have to accommodate change after all. In Tevye's words, "One little time, you pull out a pop, and when does it stop?" The audience then wonders, "Yes, when does change stop?" and "How does one battle with tradition?"

Despite its very European setting, the Jewish elements in Fiddler on the Roof seem to be very Filipino: a father wishing "If I were a rich man," daughters dreaming "Matchmaker, matchmaker, find me a match," men congregating and drinking alcohol in local pubs, chatty mothers doting on their children, matchmakers, a religious figure (in their case, a rabbi), and other traditions.

The audience will be brought back in time by popular sentimental songs such as "Sunrise-Sunset," "Tradition," and "Anatevka," performed in combination with the cast members' clear, powerful voices, and chreographed dances. This Repertory Philippines production is meant to entertain—and entertain it does.

Despite technical problems (there were some slight glitches with the lapel microphones), the production made up for it with a talented cast of musical- theater actors and mesmerizing music by the Manila Symphony Orchestra (under the baton of Maestro Arturo Molina).

SYNOPSIS. Tevye, a dairyman, is searching for appropriate husbands for his three eldest daughters—Tzeital, Hodel and Chava. In a break of tradition, his daughters refuse to accept the wishes of the matchmaker, Yente, and their father. Instead, they marry men that they love. Meanwhile, Russians are instigating terrible pogroms against the Jewish people in Russia. In the face of changing social mores and the growing anti-Semitism of Czarist Russia, the Jews of Anatevka are forced to leave their homes and Tevye is determined to start a better life in a new land.

The competent cast of Fiddler on the Roof is led by Miguel Faustmann, who alternates with newcomer Fr. Tyler Allan Strand as Tevye. Seasoned thespians Pinky Marquez and Joy Virata alternate as Tevye's wife Golde, while director Baby Barredo does a cameo as Yente the Matchmaker (with alternate Jay Glorioso).

The show takes about two hours and 45 minutes, excluding intermission, and although entertaining, more than a few dances can still make you stifle a yawn. Still, the show is something the family ought to watch together. When you emerge from the theater, you'll find yourself humming the tunes of the musical and probably bearing this thought in mind: if simple issues can stir up generations of tradition, how much more can issues like politics, religion, and social values stir up a country and its regime?


Fiddler on the Roof, written by Joseph Stein with lyrics by Sheldon Harnick and music by Jerry Bock, runs until December 16, 2007. This restaging is co-directed by Baby Barredo and Robbie Guevarra, and choreographed by Julie Borromeo.

For ticket information, prices, and show dates of Fiddler on the Roof, call 8870710 or visit http://www.repertory-philippines.com/