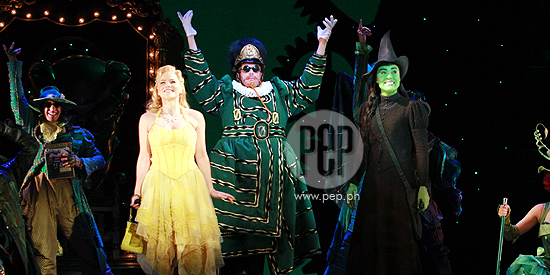 Proceeds of the Wicked Manila show on January 31, 1:30 P.M., will go to a relief fund for the benefit of the Yolanda victims. For tickets, call TicketWorld at Tel. No. 891-9999 or visit Ticketworld Online&l

The Australian production of the hit musical Wicked: The Untold Story of the Wicked Witches of Oz is not just in Manila to entertain.

The cast members are also here to help.

At a press conference held at the Cultural Center of the Philippines on January 23, James Cundall, CEO of Lunchbox Theatrical Productions, announced his company's intention to help the victims of super typhoon Yolanda.

"All of us, whether [a Wicked production] in America or Australia or the UK, were devastated by the news that came out from the Philippines in recent weeks with the awful typhoon.

"In London, we tried, during the weekdays shows, to raise some money by doing bucket collections every night at the Barry Humphries [Theater] for the relief work.

"And so, we thought maybe we could do some more, since we're here now in Manila.

"Now, the Chinese New Year happened to fall on a weekend—next weekend—and we knew it was a holiday, so what we've decided to do, with the blessing of the company, is to do a special performance next Friday for the relief fund."

"The aim is all the proceeds go to a fund, together with the Wicked company all around the world who will be donating their royalties.

"So, we hope we could raise a substantial amount of money so we can build a school or a clinic down there."

At the time of the interview, James said there are still at least 300 seats available for this particular show.

Apart from this effort, they will also hold an online auction for those who couldn't be accomodated in the January 31 performance.

Among the prizes up for bidding is a walk-on role in Wicked.

"This is something that I think will really excite the fans of Wicked.

"The role will be rehearsed, it will be costumed with the dress and makeup and all of that other stuff.

"They get to appear in one performance, three scenes during a live performance of Wicked...

"And, to be honest, that's what I would call a money-can't-buy experience right there, because it's not something people get to do everyday.

"They get onto the stage of the most biggest, most successful show the world has ever seen, and being with this great company... It's amazing!"

Another prize is a package trip for two to see the Wicked production in London.

It includes business class seats for the winners, plus a backstage tour to meet the cast and crew.

A backstage tour of the Manila production is also up for auction as a separate item.

Some of the props from the show will also be available for devoted fans and collectors to bid for.

One of those is a training wand, which comes with paperwork and photographs to back its authenticity.

Details of the auction will soon be announced online.

For more information, check out their facebook page www.facebook.com/wickedmanila.

For tickets to the January 31 show of Wicked, call TicketWorld at Tel. No. 891-9999 or visit Ticketworld Online.