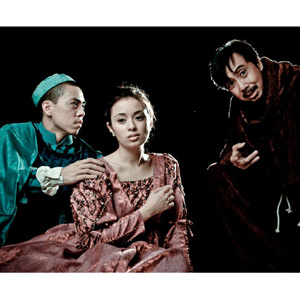 
Gantimpala Theater caps its pearl anniversary celebration with William Shakespeare's Romeo and Juliet, considered by many as the greatest love story ever told. This tragic drama on forbidden love will be staged starting December 7 at the AFP Theater in Quezon City.

One of Shakespeare's classics, Romeo and Juliet revolves around the feud and pride-hardened hatred between two of Verona's most distinguished households—the Capulets and the Montagues—and the romance that blossomed between their beloved offspring.

This drama combines the contrasting elements of humor and sorrow, bawdiness and civil strife, innocent love, and ignorant hate to rouse an amazing depth of mixed tenderness and tension, plus the near perfect lovers who take their own lives, and how this inevitable tragic end led to an ultimate reconciliation.

"Romeo and Juliet is the perfect play to round up Gantimpala Theater's 30th season," says artistic director Tony S. Espejo.

"It has all the elements that our student audiences will surely appreciate—there is drama, family feud, romance, a lot of kissing scenes and fencing sequences. I have a wonderful cast of very talented and gifted actors who are giving their 100 percent to make sure that this production will turn out to be a truly unforgettable theater experience for anyone who will view it."