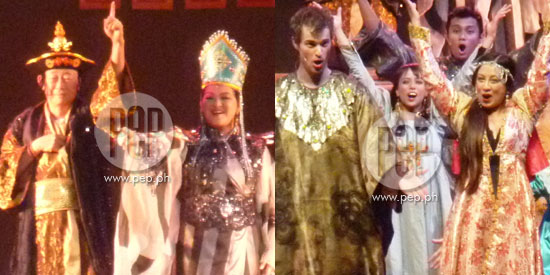 As a lover of history, I am quite familiar with the story of Marco Polo, the Italian adventurer from Venice, whose journey to China and the book, The Travels of Marco Polo (or the Description of the World, its original title, written by romance writer Rustigielo), radically changed the way people from the West perceive the East. That’s history.

However, who would have thought that they could create a love story, much less a musical, based on the story as well as its characters?

Even better, who would have thought that it would be written and composed by a Filipino (highly gifted stage actor, singer and director Rogelio Saldo Chua) and that his production would be helmed for West End in London and Broadway in New York? Well, it’s true. In June 2012, it was launched in New York, with bankers and investors in attendance.

It was only fitting that it be staged in Manila, a melting pot of both Eastern and Western influences, with its abundance of musical theater talents (from actors and dancers to instrumentalists, composers and lyricists).

On August 10, 2013, the musical’s invitational concert version was shown at the Meralco Theater while the gala night was held last February 1, 2014. It will soon to be touring Singapore, where it will have its world premiere, and some parts of Asia to drum up investor interest for the West End production, particularly from China. My wife Grace and I were fortunate to watch the February 1 gala performance at the Meralco Theater before the show goes on tour.

The two-and-a-half-hour, full-blown musical theater production Marco Polo: An Untold Love Story the Musical is written in English and presented by Artist Theater Company in cooperation with Meralco. It features 24 songs (two of them orchestral and two for the entire cast) co-mingling Oriental and Occidental strains which points to an East-West setting reminiscent of Rodgers and Hammersteins’ Flower Drum Song and the more recent Miss Saigon.

This new musical’s storyline is a dramatization of a love story between the foreigner Marco Polo, the son of an ordinary Venetian merchant, and the royal Mongol princess Kogajin, the daughter of Emperor Kublai Khan.

According to history, Marco Polo left Venice in 1271 and lived in the court of Shangtu for several years as a trusted adviser of the Great Khan. In 1298, Marco Polo shared his stories with Rustigielo when they were both imprisoned in Genoa.

Rustigelo’s book, a colorful and richly-detailed narrative about the characteristics of people, politics, culture and places as well as flora and fauna of the various regions that Marco Polo visited in the East, has been the subject of controversy among Marco Polo scholars, critics and admirers.

Not much is known about the personal life of Marco Polo. Did a young man of such energy and vigor have a love interest during his long sojourn in China? What we do know is that, prior to Marco Polo’s return to the West, he was commanded by the Great Khan to accompany a young Mongol princess, en route to her intended bridegroom, in her voyage to the Port of Ormuz. This musical production is a dramatization of what could be one of the many untold stories in the life of Marco Polo – his finding true love amidst the setting of an East-West encounter rich in historical significance. Will Marco and Kogajin succeed in their quest for true love?

David, who performed for the prestigious Guthrie Theater in Minneapolis as well as the Dangerous Ground Productions in New York City, has also performed for Repertory Philippines’ Boeing Boeing and Next Fall. He will soon be featured as one of the two lead roles in the international TV musical series The Boston: The Kitchen Musical.

Stephanie, the first Filipino-American ever to stage a full solo concert at the famed Carnegie Hall in New York, has played the role of Princess Tuptim in the revival of The King and I at the Palladium Theater in London’s West End, Kim in the German version of Miss Saigon in Suttgart, and Esmeralda in World Premiere of the Walt Disney production of The Hunchback of Notre Dame in Berlin.

Australian-born Brent Metken plays Niccolo, Marco Polo’s father. My wife and I felt so proud, after watching the musical, of the Filipinos who were part of the cast and ensemble notably veteran stage, TV and movie actor and baritone Chinggoy Alonso as Rustigielo; singer and actress Pinky Marquez as Empress Wu Ze-Lin; and baritone Miguel Faustmann (also Assistant Director for Acting) as Maffeo, Marco Polo’s uncle.

We were also surprised at the fine acting and sonorous and powerful singing prowess of business executive George T. Yang, McDonald's Philippines' chairman and founder, who appeared at the second half of the play. He joined the historic production by playing the imperious and mighty Kublai Khan. Talk about adding more feathers to your cap. George Yang did it. He, as well as the main cast, were truly deserving of the standing ovation they got at the end of the play.

The three slow-moving, languid, graceful dance numbers in the musical, with its heavy Oriental character reflective of the music, were imaginatively choreographed by Singapore-based Rose Borromeo. However, the musical’s austere stage props and backdrops, depicting medieval Venetian, Middle Eastern, Central Asian and Chinese settings, needs more imagination and improvement if ever they want to be comparable with the best musicals that made it to New York’s Broadway and London’s West End. The sets of stairs, monotonously used all throughout the musical, were creaky.

However, the simple and drab props were more than made up for by the colorful, extensively used costumes done by Odit Sarte.

The sound system also needs improvement. A number of times, the performer’s microphones failed to activate on cue or malfunctioned.

Still, all these could be forgiven as this hopefully trendsetting musical was a totally unexpected surprise and a revelation by itself, featuring—aside from romance and true love—adventure, the power struggle with the rich and mighty and assassination attempts, truly a mirror of the modern-day world.

Combined with a 15-instrument orchestra (which includes both Chinese and Western instruments), conducted by Daniel Bartolome, exquisitely melodious music and fine acting and singing by its ensemble cast, this musical has achieved its overreaching theme: "all human beings, regardless of origin, race or creed, share the same dreams and hopes, life adventures and love stories, the fascination of the mysterious and the discovery of the unknown..."

Rogelio Saldo Chua is also the artistic director of the musical production while Olivier J. Leonard, a Belgian development banker, is the show’s executive producer.