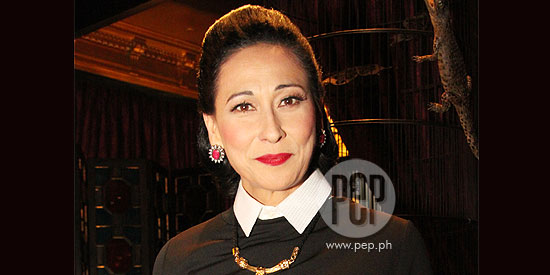 Cherie Gil says she does not normally accept another project when she is slated to do a play. She decided to step out of her comfort zone by agreeing to join the cast of ABS-CBN's primetime teleserye Ikaw Lamang while preparing for her one-woman stage play titled Full Gallop. Her play will be staged this March at the RCBC Plaza, Makati City.

Cherie Gil continues to push herself to the limit.

While she has been rehearsing the past months for her one-woman play titled Full Gallop, Cherie has also been gearing up for a supporting role in ABS-CBN’s upcoming teleserye, Ikaw Lamang.

The two projects will mostly likely coincide with one another. Despite the jitters, the 50-year-old actress is ready for the challenge and prove why she continues to excel in her craft.

“I mean kinabahan nga ako kasi nga I was going to do a theatre [play].

“When I do plays, I don’t do any other things pero hindi naman ako makahindi sa ABS [CBN] and the role, and the people behind it,” the dramatic actress said during the February 4 press conference of Full Gallop at the Salon de Ning of The Manila Peninsula, Makati City.

Deo is the head of ABS-CBN business unit Dreamscape, which is producing Ikaw Lamang, to be topbilled by Kim Chiu, Jake Cuenca, Julia Montes, and Coco Martin.

In the teleserye, Cherie will be playing Miranda, wife of Tirso Cruz III’s character and mother of Jake’s character.

On the other hand, Full Gallop is a straight play that depicts the life of fashion icon Diana Vreeland, who stood at the centre of American style for five decades.

Diana is a former editor of Harper’s Bazaar and Vogue magazines, and the play is her portrait at a turning point in her life.

THE DIFFERENCE. Although Cherie has proven time and again that she is a thespian to be reckoned with, she refuses to rest on her laurels.

PEP.ph (Philippine Entertainment Portal) asked the actress what is the difference between doing a theatre play as opposed to acting in a teleserye.

“Malaki,” she answered. “Theatre keeps me on my toes.

“Talagang there’s no way but for me to be more disciplined, too structured…”

“At this point in my life, I need to put my energy into some structure and theatre gives me that.”

Among Cherie’s credentials in theatre include Doubt, Nine, and Master Class.

As for doing a soap opera, Cherie said matter-of-factly, “Soap, I can do it with my eyes closed.

“Ang dami-dami kasing tengga-tengga [sa set], so that keeps the fun and that’s what pays my bills.”

Cherie’s most recent teleseryes prior to Ikaw Lamang include Temptation of Wife (2012) and Muling Buksan ang Puso (2013).

BEING DIANA VREELAND. In Full Gallop, Cherie said that she has to memorize 45 pages of monologue. The play is set in August 1971 in Diana Vreeland's Park Avenue apartment. She has just returned home to New York after four months in Europe—a trip she took after being fired from Vogue magazine. The fashion icon is at a crossroads as she decides in which direction her life will move.

What are the challenges she faced in her portrayal of Diana Vreeland?

“She’s 70 [years old], that’s one challenge,” the 50-year-old actress said about her character.

“She is a very imaginative, bigger-than-life woman,” she stressed.

“She talks about things I have not been able to see, you have no chance but to delve in her spirit, you see all that she sees, you get to research and you learn even a lot more than you know now.”

At the time of the presscon, when she was asked how long she prepared for the role, Cherie replied, “I’m still preparing, I’m not quite done yet.

“Let’s just say I started reading about her about six months already.

“I’ve had read three books [about her] when I was in New York, I walked the streets that she walked, where she worked…”

Cherie also acknowledges that stage plays are not popular among the masses but she remains hopeful that someday, they will be able to appreciate this form of entertainment.

“I would like to be able to think that the masses will eventually be interested in the world of theatre, regardless of what is being put on stage whether it be straight play, whether it be musical.”

And while some of her friends encourage her to venture into more profitable activities, Cherie opts to focus on her passion, which is acting.

“I produce, I want to create roles, I wanna perform.

“Sabi nga nila, ‘Cherie, better start money-making and all that…’ I don’t know.

“This is what rings inside me right now.”


Full Gallop is set to open with a gala night premiere on March 14 with regular performances on March 15 and 21 at 8 p.m. and on March 16 and 23 at 4 p.m. at the Carlos P. Romulo Auditorium, RCBC Plaza, Ayala Avenue corner Sen. Gil Puyat Avenue, Makati City.

Ms. Giselle Tongi will have a special participation in Full Gallop.