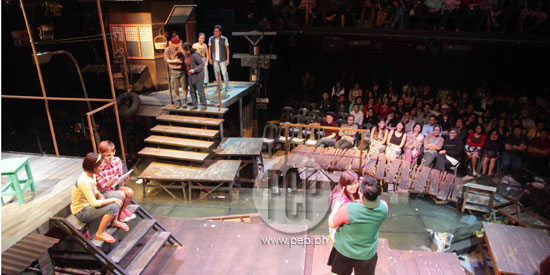 An estero filled with floodwater is incorporated into the set design of Rak of Aegis. This musical, which uses songs of the Pinoy rock band Aegis, will run until March 9, 2014 at The PETA Theater Center in Quezon City. Tickets are available at Ticketworld (Tel. No. 891-9999) or

It seemed inevitable that someone would come up with the idea of using the music of ‘90s Pinoy rock band Aegis in a musical. The heart-wrenching lyrics and anthemic songs are perfectly suited for the stage. With the popularity of musicals that feature pop/rock songs such as Mamma Mia, American Idiot the Musical, We Will Rock You, Ejay, and Sa Wakas, it was only a matter of time.

Two years ago, PETA artistic director Maribel Legarda and musical director Myke Saloman were making puns about the popular musical Rock of Ages. Thus, Rak of Aegis was born. The play is set in Villa Venizia (a pun on the canal city of Venice), a small community that has been submerged in flood for almost two months. The people are barely getting by.

Little did PETA know that Rak of Aegis would resonate even more with the devastation caused by supertyphoon Yolanda still fresh in the public consciousness.

A young promodizer named Aileen (played alternately by Aicelle Santos and Joan Bugcat) dreams of becoming a YouTube sensation and being discovered by Ellen Degeneres. She wants to help her father, Kiel (Robert Seña/Julienne Mendoza), who is in danger of losing his job. Kiel tries to convince business owner and BarangayCaptain Mary Jane (Isay Alvarez-Seña/Kalila Aguilos) not to close down her shoe factory so that he can keep supporting his family. Kiel and Mary Jane used to love each other, but they parted ways and Kiel ended up with Mercy (Cacai Bautista/Neomi Gonzales).

Kiel, Mary Jane and Mercy’s love triangle parallels Aileen’s situation. Aileen likes Mary Jane’s son, Kenny (Poppert Bernadas/Myke Salomon), but he has too many hang-ups of his own. Aileen’s friend, Tolits (Pepe Herrera/Jerald Napoles) is smitten with her, but he doesn’t have the courage to tell her how he feels.

Aileen loses her job. She decides to make a video of herself singing against the backdrop of her flood-ravaged community. Tolits posts the video online, not knowing it will put Villa Venizia on the map. Will Aileen’s newfound fame solve everyone’s problems or is it just a temporary solution? In this way, Rak of Aegis explores the true meaning of resilience.

The cast played their roles superbly. Joan Bugcat captured Aileen’s spunky and driven character. Joan could easily belt out the power notes and then switch to a soft falsetto for the ballads. Myke Salomon convincingly played the angsty but charming Kenny. Pepe Herrera stood out in his portrayal of Tolits, an unassuming character who often goes unnoticed. He incorporated movements and mannerisms which made Tolits seem like a real person. Both guys sang the Aegis songs admirably well.

As Aileen’s irrepressible best friend, Jewel, Phi Palmos stole the show. He nailed all the funny moments and had the crowd in stitches.

Veteran actors Julienne Mendoza, Cacai Bautista, and Kalila Aguilos shone in their respective roles and hit the gravity-defying notes with ease. The audience, consisting mostly of students, whistled and cheered at every kilig moment. Simply put, the actors were effective in grabbing audience’s attention.

Direk Maribel Legarda brought out the best in her actors. Her blocking was dynamic. There was a lot of action happening onstage, but the focus for each scene remained clear. There were a few instances though when actors were standing on a part of the set that was obscured from the view of the audience seated on the left side. At times, it was hard to see who was talking.

The use of multimedia complemented the action onstage. Television sets showed Aileen’s YouTube video, news reports, and even real footage of a typhoon disaster. The typhoon footage was particularly moving. There were engaging moments of audience participation as well. In the story, the community capitalized on the flood by creating a tour named Baha-landia. Members from the audience were actually invited to go around the set as tourists.

Production designer Mio Infante’s set design recreates the atmosphere of a slum area. There was a small estero filled with floodwater flanked by a wooden shanty, a small sari-sari store, and tiny huts to represent other shanties. There was a narrow makeshift walkway and a small bancaused to ferry people. Rain even fell during the storm scene. Jonjon Villareal’s lighting complemented the different mood for each scene, especially the storm scene.

Around 20 Aegis songs were used in the musical, including popular hits such as “Luha,” “Halik,” “Sundot,” “Christmas Bonus,” and “Basang-basa sa Ulan.” Musical director-actor Myke Salomon chose tunes that would reflect the characters’ emotions. The songs were masterfully arranged. Some rock songs were stripped down to acoustic ballads. The lyrics were also changed to suit the story (for example, “Ang halik mo namimiss ko” was changed to “Ang delubyo namimiss ko.”)

Palanca Award-winning writer Liza Magtoto succeeded in writing a musical that had a real story at its core instead of just being a medley of musical numbers. This Pinoy rock-comedy musical breathes new life into the Aegis song catalogue. Liza’s snappy dialogue matched the tone of the lyrics, which are heartfelt and peppered with street slang. The comedy is spot-on and very Pinoy. There was even a Deniece Cornejo joke thrown in the mix.

Gio Gahol’s choreography is fun and youthful, featuring various styles of street dance. The use of props like bubbles and umbrellas add a whimsical quality to the musical numbers.

Rak of Aegis is to be commended for tackling a sad reality and presenting it in an entertaining, but not exploitative, manner. The story makes you feel the plight of survivors and their mounting frustration as everything falls apart. You can’t help but sing along to catchy Aegis songs and laugh at the comic situations. The Filipinos’ ability to laugh and sing even during the most difficult times is something that rings true not only in the play, but in real life as well.

Rak of Aegis will run until March 9, 2014 at The PETA Theater Center, located at No. 5 Eymard Drive, New Manila, Quezon City.