"Into the Woods" with offbeat Brothers Grimm characters 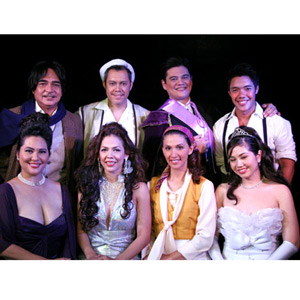 Living a fairy tale does not involve perfection, as shown by the New Voice Company stage offering Into the Woods. Cast members (standing) Tommy Abuel, Michael Williams, Jamie Wilson, and Joaqui Valdes bring to life the charming men of fairy tales. And (seated), Juno Henares, Lynn Sherman, Menchu Lauchengco-Yulo, and Cathy Azanza are the damsels and dames who learn the power of wishes and dreams.

A comedic medley of fairy telltales and happily never afters—New Voice Company's production of the Broadway musical Into the Woods is all that and more. Based on James Lapine's book of the same title, Into the Woods is a hodgepodge of familiar Brothers Grimm characters that all come colliding, well, in the woods.

The first act is centered on the basic storybook premise as each character sets out to find their happily ever after. A somewhat confused Cinderella (Cathy Azanza) goes to the ball and meets her prince (Jamie Wilson). Simple-minded Jack (Joaqui Valdes) trades his cow for magical beans and climbs the stalk. Bad-ass Red Riding Hood (Julia Abueva) survives a wolf-attack. A needy Rapunzel (Angela Padilla) gets rescued from the tower by her prince (John Mulhall).

All the while, the childless Baker (Michael Williams) and his wife (Menchu Lauchengco-Yulo) chase after them, hoping to lift the Witch's (Lynn Sherman) curse by gathering ingredients for her potion: a cow as white as milk, a cape as red as blood, hair as yellow as corn, and slipper as pure as gold.

It's fun watching the different characters stumble through the forest and bump into each other. There's a certain controlled chaos on stage with everyone in constant motion, a cow being dragged/carried everywhere, and the recurring appearance of the Mysterious Man (Tommy Abuel). But if the play lacks visual appeal, the cast members make up for it with their dance and song numbers. The key is to really pay attention to the songs.

Kudos to Ceejay Javier's wonderful live musical direction and Stephen Sondheim's powerful lyrics bordering from hilarious to dramatic. The standout performances are the overall singing and acting of the Baker's Wife; the princely brothers duet on "Agony," where they lament about their ladyloves; and the ugly Witch rapping about her vegetables: "But I'm tellling you the same / I tell kings and queens / Don't ever never ever / Mess around with my greens! / Especially the beans."

After all the merriment in the lengthy first act, the second half takes a rather dark turn. A threat of gigantic proportions appears and each character—all the while dealing with personal dilemmas—must work together to fight it off. The sudden death of some characters, unlikely coupling, and downbeat songs constantly surprise the audience.

The "Agony" gets a beautiful reprise as the "charming but not sincere" princes are apparently smitten with other fairy-tale beauties singing "What unbearable bliss / Agony / That can cut like a knife! / Ah, well, back to my wife." But the highlight is the long-winded number "Your Fault" as remaining characters play the blame game on who's at fault that a near-sighted she-giant is destroying their land and killing them one by one. The finale "Children Will Listen" sums up the themes of family relationships and embracing responsibilities in life.

Everything is not what it seems in the woods, which makes watching this fairytale musical entertaining for kids and adults alike. Catch Into the Woods directed by Rito Asilo until December 8, every Fridays and Saturdays, 8 p.m., at the Music Museum in Greenhills. For tickets, call the New Voice Company office at 8966695, 8965497 or 8990630, or email them at nvc@pldtdsl.net