THEATER REVIEW: Priscilla, Queen of the Desert: The Musical 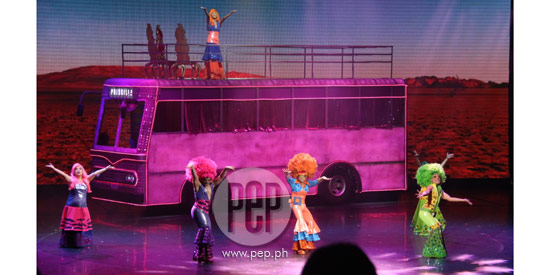 Priscilla, Queen of the Desert: The Musical is being staged at the Newport Performing Arts Theater in Resorts World Manila until July 2014.

For a fan of the movie The Adventures of Priscilla, Queen of the Desert, directed by Stephan Elliott, watching the musical based on the film on opening night in Manila was absolutely exciting.

The opening number did not disappoint, with an LED backdrop showing the Sydney Harbour Bridge and with a pulsating rendition of “It’s Raining Men” by The Divas composed of Bituin Escalante, Lani Ligot, and Tammy Canlas. The costumes, direction, and choreography had the audience pumped as the story unfolded.

Priscilla, Queen of the Desert: The Musical tells the story of two drag queens and a transsexual who go on a roadtrip to the resort town of Alice Springs somewhere in the Australian desert.

For different reasons, they leave the bustling city to go on this outback adventure in a big bus they christen “Priscilla.” For Tick/Mitzi, played by Leo Tavarro Valdez, his goal is to meet his son Benjie for the first time; for Ralph/Bernadette, essayed by Jon Santos, he wants to recover from heartache, and for Adam/Felicia, portrayed by Red Concepcion, he aims to conquer a mountain—in this case, Ayer’s Rock in central Australia.

On the way there, they encounter various people and situations that define a “roadtrip movie.” Director Jaime del Mundo ingeniously gives this feel on-stage with the LED backdrop of open road scenery and a bus (and its wheels) moving realistically.

This is a celebration of disco, and so, from the first strains of Michael Stuart Williams’ (as Miss Understanding) impersonation of “What’s Love Got To Do With It,” audience members enthusiastically sing and sway and jump in their seats. Williams’ voice is crisp and clear, and his Tina Turner rendition is spot-on without being a caricature. 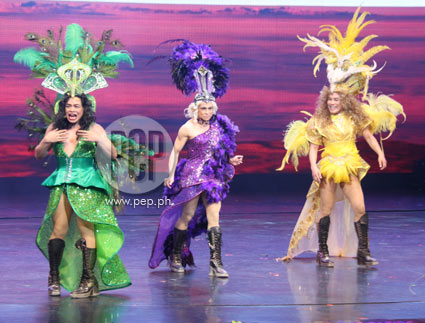 The costume department, led by designer Edgar San Diego, deserves props for putting together colorful and tasteful throwbacks to the era of bell bottoms, platform shoes, and sequins. Aside from the three leads’ costumes, theatergoers can look forward to what The Divas will come out on stage wearing next.

Valdez and Santos both bring musical and dramatic talent to great heights. As veteran thespians, it is no surprise that they own the big stage. Even during their solo scenes, they bring the audience in. Yet, Concepcion is able to hold his own while sharing the stage with these theater greats. As the young upstart in the story, he is able to captivate the audience and make them empathize with his search for a place in the world.

Given the multitude of disco music, flashy stage design, and flamboyant costumes, it would have been very easy for the show to fall into the trap of being a concert with all the glitz and glamor but no heart. Yet soulful musical numbers like “Say A Little Prayer,” “True Colors,” and “You Were Always on my Mind” keep this from happening.

The lighting design by Shakira Villa-Symes complements the cast’s performances and the costumes. My favorite scenes include the ones featuring “True Colors” in Act 1 and “Hot Stuff” in Act 2. At this point, the choreography by Nancy Crowe must be mentioned as well. It not only works well with the straight-on musical numbers, but also ingenious “flashback” sequences, as well as, notably, the “Hot Stuff” scene.

Even in the movie version, I was not completely sold on the portrayal of Cynthia, a stereotypical Filipina “mail-order” bride. However, the portrayal in this musical is a little too over-the-top for me. Granted, she has no backstory provided, like Gigi in Miss Saigon; yet, the characterization feels too much like a caricature. Still and all, the performance involving ping-pong balls always fascinates.

The show suffers from bouts of technical difficulties, too. With the use of projection screens on both sides of the stage, the multimedia experience changes musical-viewing, for better or for worse. The cameras seem to be situated somewhere that is not cordoned off, so that there were times when someone would pass by and momentarily cut off the visual.

The sound system also needs some work, with levels going up to concert-loud—and overpowering one or two characters who should actually be heard. The levels need to be adjusted on the microphones as well as the musical instruments. Despite these technical difficulties, the live band was able to show its immense talent.

There are no divas in this production, the leads share the stage equally. The cast members are energetic enough to entice the audience to jump in and dance even with the repeated playing of the anthem: “I Will Survive.”

In the end, Valdez, Santos, and Concepcion, with their characters’ realizations belt out “We Belong.” It is a poignant and powerful performance. The musical has been staged in Sydney and Broadway, and is being staged in different parts of the world like Athens and Buenos Aires. With Filipinos’ penchant for music and flashy costumes, Priscilla, Queen of the Desert will surely strike a chord. Hopefully, they also will overcome their shyness and go ahead and dance.

The musical is being staged at the Newport Performing Arts Theater in Resorts World Manila until July.