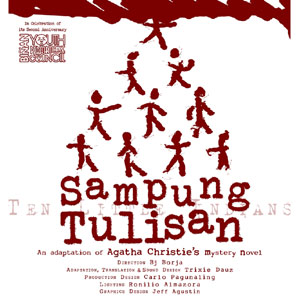 The Biñan Youth Performance Council will perform Sampung Tulisan, the Tagalog version of Agatha Cristie's mystery thriller novel Ten Little Indians / And Then There Were None, on December 13, 14 and 15.


In celebration of its second anniversary, the Biñan Youth Performance Council (YPC) will present the Tagalog play, Sampung Tulisan. This is an adaptation of Agatha Christie's mystery thriller novel Ten Little Indians / And Then There Were None. Play dates are December 13 and 14 in Colegio San Antonio, Biñan, Laguna, and on December 15 in Pacita Astrodome, San Pedro, Laguna. The play will be staged at 7:00 pm in both venues.


Agatha Christie was an English crime fiction writer. Her numerous detective novels gave rise to her title as the "Queen of Crime" and made her one of the most important and innovative writers in the development of the genre.


The play is based on Christie's book, which was first published in the UK in 1939 and was republished in the United States in 1940. It is about ten people, each with something to hide and something to fear. These ten strangers each receive letters, signed by an old friend, to live in a lonely mansion on Indian Island. On the deserted island, they are cut off from everything but each other and the inescapable shadows of their past. One by one, the guests share the dark secrets of their wicked lives. And one by one, they start to die mysteriously. It isn't until the remaining guests see an old nursery rhyme about different ways you can die that they realize what their fate will soon be.

YPC is a non-stock cultural organization that mounts celebrated productions to bring the arts closer to the community. YPC aims to preserve the arts and cultural practices in Biñan and its neighboring towns through spearheading worthwhile projects that involve the youth, such as art productions, especially theater.