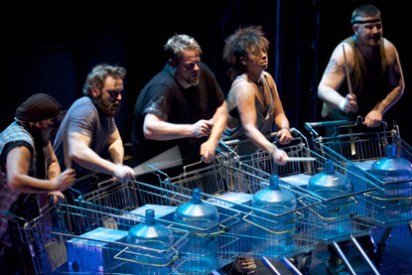 The show is composed of an ensemble of 8 persons, one set, and a myriad of industrial and home items. But how do they sustain one and a half hours of the audience’s attention—sans dialogue or musical instruments, and without an intermission at that? With a lot of rhythm and enthusiasm.

The endurance and energy of the cast members are exemplary. They jump around, play “instruments”, and move along in sync that it is simply awe-inspiring.

Behind what we see onstage is such precision and rhythm that you cannot help but be inspired by the actors/musicians/dancers but also by the director and every member of the behind-the-scenes crew. It is a production where no one person can be credited for its beauty—it is indeed a collective effort.

The lighting also varies according to the situation. Spotlights do not only draw attention or highlight key actors but also set the mood onstage. A spotlight draws our attention to one among the many who is dancing with sand and dust falling off his clothes; spotlights cause a faint shadow for the gasp-inducing lighters sequence. Stomp is also a testament to the fine acoustics at the Cultural Center of the Philippines’ Tanghalang Nicanor Abelardo. Every small click or snap emanates throughout the great hall.

The set has character too. There are street signs and various sizes of pails and buckets, and other odds and ends and what-nots. The elements seem to have been thrown together haphazardly. But in the loudest scene involving most (if not every piece) of the set, they each reveal a rhyme, reason, and purpose.

I have many favorite scenes. One of them is when the musicians, suspended on harnesses, play everyday items as instruments that are fixed on a 90-degree angle. The entire Tanghalang Nicanor Abelardo exploded with sound and light. I also loved the impact of the more quiet scene involving lighters coming on and off in different combinations, with not only the light but also the faint sound of the metal contraptions entertaining the hushed crowd.

It’s not all banging and stomping, mind you. The nuances in qualities, intensities, and volumes of sound are explored in the performance. From plastic tubes of different lengths to sticks to plastic drums—and even a sink!

Being so precise, there is little improvisation in the performance, as far as I can tell. There is some level of audience participation, which is also very engaging and even the more quiet men and women can’t help but clap and snap and stomp at the egging of the performers.

It is not just a pastiche of performances, however. The characters come through as there are comic breaks in some scenes. Hawaiian-born Filipino Andres Fernandez provides comic relief and needed “heart” to the show. Perhaps it’s because he’s Pinoy that he is able to make the audience laugh and giggle with just a few changes in his facial expression.

The show is actually more than two decades old and was first staged in Manila in 2011. Yet, I do not doubt that every performance has its share of uniqueness. While watching, I couldn’t help but think that my nephew who’s growing up to be a musician and whose mom teaches Kindermusik, would enjoy it. The beauty of this show lies in its universality: in music and dance as universal languages and in entertainment not discriminating according to age.

Each scene is well-choreographed, lit, and put together. So much so that when you check your watch more than an hour later, you are surprised that so much time has gone by. But there is a scene or two towards the last part of the performance where the momentum sags a bit. Nevertheless, in general, the show is worth your time and definitely a testament to the human body’s versatility and endurance.