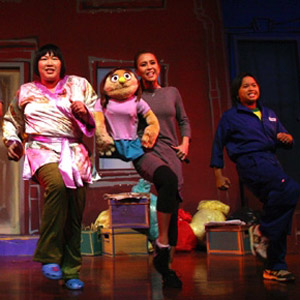 (From left) Frenchie Dy, Rachel Alejandro, and Aiza Seguerra bond together while rehearsing for Avenue Q. The repeat performances of this comic musical will take place at the RCBC Plaza, Makati City, from December 14-23, 2007.

After its recent sold-out run, Atlantis Productions' hit staging of the Tony Award Winning Broadway Musical Avenue Q will be back in Manila to spread holiday cheer from December 14 - 23 at the Carlos P. Romulo Auditorium, RCBC Plaza, Makati City.


Winner of the 2004 Tony Award for Best Musical, Avenue Q is most accurately described as a cross between Sesame Street and Rent. Due to full puppet nudity, parental discretion is advised.


This two-act play tells the story of Princeton, played by Felix Rivera, a 24-year-old college graduate who lives in a big city hoping to fulfill his big dreams with only a tiny bank account. With his meager savings, he moves into an inexpensive apartment being maintained by Gary Coleman, the former child star who became famous in the U.S. for his TV sitcom Diff'rent Strokes. The African-American star is portrayed by former child star Aiza Seguerra, who admits that she herself didn't know about Gary Coleman until she accepted this role in Avenue Q.

The actress-acoustic singer is very thankful to be part of yet another stage production since her last theater appearance was in 2002 for The Rocky Horror Picture Show.

"Hinihika pa ako nun. Dress rehearsals namin may nebulizer ako. Ang daming na-cancel like out-of-the-country shows," she says, without a trace of regret in her voice. Aiza declares: "It was worth it."


Featured in the stellar cast are Rachel Alejandro as Kate Monster/Lucy T. Slut, Felix Rivera as Princeton/Rod, Frenchie Dy as Christmas Eve, Rycharde Everley as Brian, Joel Trinidad as Nicky, Trekkie Monster and others, Teenee Chan as Mrs. Thistletwat and others and Aiza Seguera as Gary Coleman.

Rachel Alejandro tells PEP how she prepared for her role as a puppeteer for the two characters, Kate Monster and Lucy T. Slut. "Nag-gym talaga ako at pinalaki ko talaga ang upper body ko. May mga muscles dito [points to her arm] na hindi mo ine-expect na sasakit talaga. First day ko, I was so overwhelmed...I didn't know if I made a mistake. I don't know if I can do this," she narrates.

"But of course, I'm not a quitter so I just went and went to rehearsals. After a while, they took pity on me and reduced the puppet. They made her lose weight. Pinag-diet nila si Kate Monster. The other puppet, Lucy T. Slut, was okay since sexy na talaga siya," Rachel points out.

The singer became so attached to her role that she even bought a puppet of her own so she could practice with it while the cast went on a three-month break after the first theater run. "I ordered a puppet from the puppet maker. I ordered one like Lucy kasi maganda si Lucy. [laughter] She's the prettier puppet, blond siya and has big boobs.

"I decided to have my own puppet made because we had a three-month break. They were laughing at me, sabi nila, ‘Sobra ka namang O-C [obsessive-compulsive],'" Rachel says with a laugh.

Aside from working with puppets, Rachel also got to develop a bond with fellow singers Aiza and Frenchie Dy. "I feel grateful...Aiza and I have known each other since we were both children. But we've never had one conversation before. Since this play, since rehearsals...we came together for this play. I feel now she's like a sister to me. We shared such a great experience together.

"She [Aiza] had a concert and I went. I've never seen her perform in a show before and I never would have if we didn't have a play together. I would have never have found out what a fantastic performer she is. I would never have watched an acoustic show out of the blue.

"She invited me and it was a pleasant surprise. I found myself like a groupie there. I was singing with the audience and raising my arms in the air," Rachel recounts.

Considered as an unholy comedic alliance of humans and puppets, Avenue Q is directed by Bobby Garcia and Chari Arespacochaga. Production design is by Mio Infante, lighting design by Jay Aranda, puppet execution by Sam Fuentes and Marvin Choa based on the original Broadway designs of Rick Lyons and musical direction by Jojo Malferari.