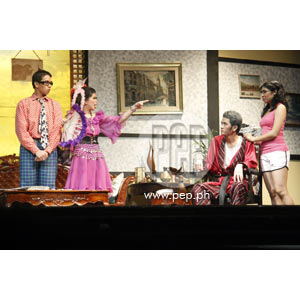 In Wanted: Chaperon, (L-R) Fred and Doña Dolores confront Don Francisco and his daughter Nena regarding the date wherein the two young children went out without a chaperone. The twin-bill production Twosome was directed by TV host-comedian John "Sweet" Lapus.

In celebration of the 30th anniversary of Teatro Tomasino, TV host-comedian John "Sweet" Lapus goes back to his roots and directs this twin-bill production involving traditional families and modern-day call centers.

For the first part, Ma'am Chelsea addresses the audience and facilitates the orientation for their newly hired employees. The stage is set up to look like the cubicle of Chelsea in IntelStar, a call center that specializes in U.S. directory assistance. As the training manager, she is tasked to teach the new recruits (the audience) to assimilate and use a neutral American accent.

Since it is an interactive portion, there are exercises wherein Chelsea asks for volunteers to go to the front of the auditorium to try their hand in reading phrases just like Yankees. It's a fun portion that brings out the creativity of the students. It could also spell déjà vu for Thomasians who just might find themselves undergoing a similar training activity for a call center in the future.

There are poignant moments in Welcome to IntelStar, especially when Chelsea narrates an incident involving her and an elderly Filipina who called up their directory assistance hotline. There are rumors circulating that when you dial 411 in the United States, a Filipina will answer. Despite her American accent and refusal to divulge her identity, Chelsea could not conceal the fact that she is actually a kababayan, which is proof that being a Filipino is a trait that years of training cannot undo.

After her monologue, the stage was made to look like the interior of a home, complete with capiz windows and a staircase. When two dysfunctional families come together, expect chaos and disorder to reign. We take a peek into the home of Don Francisco as he tries desperately to hold on to tradition in the face of modernity.

Wanted: Chaperon was written in 1940 and for today's generation, the need for a chaperone is practically non-existent. In fact, we could hear snickers from the audience when the patriarch of the family kept insisting that his daughter Nena needed a chaperone when going out on a date with her guy friend.

There is a debate between the mother and father discussing the pros and cons of having a chaperone. The mother points out that their daughter is a well-educated girl whose mind will reign over her heart but the father claims that all it takes is one night of passion to ruin her reputation as well as their family's.

Of course, the youth cheered for the liberal mother but the debate did establish the reasons why past generations found it necessary to have chaperones for young people. The one-act play becomes even more hilarious with the arrival of Doña Dolores and her torpe son, Fred. She insists that something happened to her son and Nena when they went out together without a chaperone (que horror!).

Classic lines popularized by Sweet Lapus become a focal point in the play. The matriarch turns to her child and spews the line: "Don't lie to me!" This is the dialogue of John Lapus when he confronts a showbiz personality for his segment in Showbiz Central.

Influences from video-sharing site YouTube and cult movies (such as Sylvester Stallone's Rocky) are also very evident in this classical play. These comic touches modernize Wanted: Chaperon but in the end, Don Francisco's word rules.

Sweet's natural flair for comedy is very apparent throughout this twin-bill production. There were a lot of super exaggerated movements and acting by the actors, but this is a necessary ingredient in theater since the cast should let everyone see what they're doing—including those who are seated at the back of the Albertus Magnus auditorium where the play was staged.

Twosome is a highly entertaining play that is fun to watch and fun to participate in, especially during the portion of Welcome to IntelStar. The youth might not be able to relate to the dilemma of worrying about chaperones and taking care of the "family's honor" but Wilfrido Guerrero's play is a good eye-opener about the so-called generation gap between parents and children.