Lance Raymundo reprises his role in "Romeo and Juliet" 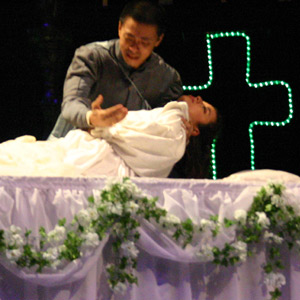 Romeo (Lance Raymundo) grieves over the "dead" body of Juliet (Monica Llamas) in Gantimpala Theater Foundation's Romeo and Juliet. The production will be staged at the AFP Theater on January 19-21, 2008.


Gantimpala Theater Foundation's rendition of William Shakespeare's play Romeo and Juliet received a storm of applause and cheering, especially during the romantic scenes of Lance Raymundo and Monica Llamas.

Six years ago, the singer-turned-thespian played the lead character in Romeo and Juliet, which was also staged back then by GFT. This time, Lance reprises the role of Romeo in a four-month run of Gantimpala Theater Foundation's pearl anniversary offering.

His acting is almost perfect, but for a few quirks in his performance. As an actor, one must be able to disappear in the character's own thoughts and words, or in layman's terms, put oneself in another's shoes. This calls to mind Hollywood actor Daniel Day Lewis who is dubbed by a 2002 Vogue magazine issue as "the disappearer."

Lance has a way of reciting his lines from the script first and then showing his reaction, or it would be the other way around. Acting and reciting the lines wasn't done at the same time. Sometimes his acting would be too exaggerated for a mere line or action that is supposed to be acted simply or naturally (like when Romeo tries to commit suicide or when Romeo drops a dagger).

Yet his intense acting was noteworthy in several key moments of the play. You could sense the frustration of the two main characters when Romeo receives the wrong information that his beloved committed suicide, and when Juliet was obliged to marry Paris (played by Star in a Million finalist Francis Ong). The most heartbreaking scene is when Romeo kills himself at Juliet's tomb, bringing this author to tears.

One surprising portion of the play occurred when Tybalt (Miguel Vasquez) fell from the balcony of the stage. The loud thud shocked the audience watching the performance at the AFP Theater.


The acting intensified as the story moved forward, thus providing a fitting climax for GTF's Romeo and Juliet. Monica and Lance's performance as the "star-crossed lovers" was poignant and realistic, especially during the brief love scenes. There were loud hoots and cheers from the crowd composed mainly of students from Manila and nearby provinces.

The plot didn't stray much from the original Shakespearean play (only the swordfight between Paris and Romeo near Juliet's tomb was missing). However, the script and storyline were heavily influenced by Australian director Baz Luhrmann's adaptation of Romeo and Juliet (Romeo+Juliet, 1996). Even in local theater, Hollywood continues to affect the way Filipinos bring classical pieces to life.


The set was simple with minimal designs, helping the audience focus more on the acting and the story. Two staircases led to Juliet's bedroom on the second floor; a skull, a cross and other paraphernalia were seen on an altar placed underneath a staircase on the right; and a huge LCD screen in the background flashed the play's title each time the props were changed.